This event provides a unique opportunity to drive the full range of Porsche models, from the electric Taycan Turbo S to the 911 GT3, the Cayenne Turbo GT and the 718 Cayman GT4 RS, among others.

The activity, to which 480 VIP participants from the brand and 40 journalists from six countries in Latin America and the Caribbean were invited, took place last month. A group of 44 participants were able to drive from the Porsche Center Santo Domingo (downtown Santo Domingo) to La Romana (a coastal city in the eastern Caribbean), where the guests enjoyed lunch at Casa de Campo Resort.

Carolina Khoury, marketing and public relations manager of Porsche Center Santo Domingo (PCSD), explains that the planning of the PWRS begins a year before the event. “Subsequently, after six months, we begin the development of the schedule with partner companies that accompany us in the import of vehicles, logistics and international quota of people who will come to the Roadshow.

The previous edition of the PWRS was held in February of this year and was held in Guatemala. From this Central American country came the 27 vehicles that were tested in the streets of Santo Domingo. “These cars were tested by journalists and potential customers of the brand who have not yet had the opportunity to drive a Porsche”. 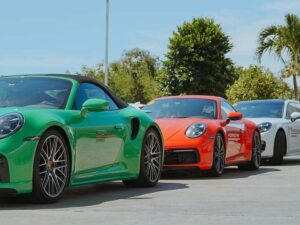 Jacinto Peynado, president of PCSD – Auto Europa, comments that close to 450 people were invited during the thirteen days of this event. “Porsche authorizes the realization of the PWRS every four years and if this one meets the brand’s expectations, it can be every three years”. The executive reveals that they should have organized the PWRS in 2019, but because of the pandemic they had to postpone it.

“It is an activity that Porsche has been doing since 2000. In recent years, about 45,000 people from 45 countries have had the opportunity to participate in this driving experience.”

Porsche DR’s participation in the sector

Peynado tells that the premium vehicle market in the Dominican Republic ranges between 1,800 and 2,000 units per year, of which Porsche has a share of around 220 annual sales.

“The Porsche market is growing. We, as PCSD, are expanding to Curaçao, where we sell about 35 units a year, and to Haiti, where 15 vehicles are marketed annually.” Peynado adds that the intention is to continue expanding to other Caribbean sectors such as Aruba, Sint Maarten and Bonaire.

MOTORES was pleased to be part of this event that brings together hundreds of fans of luxury cars from the Porsche portfolio.

The route started from the Porsche Center Santo Domingo, located in the center of the city, from here we started driving the 911 Targa 4 GTS. This car has 480 hp (353 kW), the twin turbo engine of 6 cylinders and 3.0 liters reach a top speed of 311 km/h.

After approximately 25 kilometers, we had to make a stop to change drivers or vehicles. To continue with the tour we got into the Cayenne Turbo GT, which is considered the fastest SUV in the world due to its 4.0-liter twin-turbo V8 engine, which delivers 631 hp, achieving top speeds of 300 km/h.

The route along which the three convoys were driving was in accordance with the vehicles, the scenery was spectacular bordering the Caribbean Sea, the road in good condition to get the most out of the performance of the cars.

It was time to test the Taycan Turbo S Cross Turismo, one of the first Porsche electric cars in the modern era. It features a 33-module battery with a total of 396 cells. It has an overboost of 761 hp (560 kW) with the launch control function activated, and accelerates from 0 to 100 km/h (62 mph) in 2.8 seconds.

After getting to know the wonders offered by this version of the Taycan, we arrived at a luxurious resort located in the town of La Romana, 162 kilometers from Santo Domingo. Here the whole group took the opportunity to have lunch and enjoy the beach.

The way back to the Porsche Center was 160 kilometers, on this trip we tested two more vehicles: the 911 Turbo S and the Boxster GTS 4. Both cars behaved like what they are, real racing cars on the road.

This activity offered by Porsche, both to the international press and its customers, serves to learn more about the different models of its elegant portfolio; so more people are captivated by the brand. Undoubtedly, a high-end event, according to the vehicles offered.

Pimpinela to celebrate 40 years of career in Santo Domingo

Pimpinela to celebrate 40 years of career in Santo Domingo

Anthony Santos announces only concert in the capital city in 2022

Arajet arrives in Mexico and starts sales in Jamaica