Mine of LarimarThe Larimar was discovered there is less than 3 decades, and its celebrity was instantaneous. It is a rare gem, which is found in only one place in the world, in Dominican Republic. This is why the larimar is regarded as a true jewel, single and snuffed.

Larimar is a variety of pectolite, or a rock mainly made up of pectolite, sodium and calcium acid silicate hydrate. Although pectolite is in many places, none has single volcanic blue coloring larimar.
This blue color, distinct from that of other pectolites is the result of the cobalt substitution for calcium.

The only locality where larimar, or blue Pectolite, appears on the earth’s crust is the province of Barahona, in the area of the south-west of the Dominican Republic. The layer of larimar is in the village of “Los Chupaderos” to approximately 10 km, in the mountains, close to the town of Barahona.

On November 22, 1916, Miguel Domingo Fuertes de Loren of the parish of Barahona asked for the permission to the ministry of the Dominican Republic to explore and work the mine which he had discovered and which contained a certain blue rock.
Since nobody knew that about which the priest spoke, the request fell to water and the discovery of the blue stone was delayed.

It is only in 1974, in the foot of the chain of Bahoruco, in the coastal province of Barahona , that a blue band in the sand of beach held the attention of Miguel Méndez and of the volunteer Norman Rilling and they dug to rediscover larimar.

Natives, who thought that the stone came from the sea, called it the blue stone. The name of “LARIMAR” was given by Miguel Méndez by associating the name of his daughter “LARIssa” , and sea Spanish “MAR” .

He proves that the few found stones were alluvial sediment, washed in the sea by the river of Bahoruco. An ascending research indicated that the mine of “Los Chupaderos” constituted the only mine of larimar known in the world and larimar was classified in 1979 like hones semi-precious.

The island of “Hispaniola” started to be formed by volcanic eruptions, approximately 100 million years ago. A new east mountain is created with the chain of Bahoruco in south-west of the island, starting with its Eastern part. The formation of larimar is highlighted by basalts and andesites.

The volcanic phenomena supported the association of chemical elements. Then an association far from frequent was formed in nature: silicon-oxygen with sodium and calcium elements. Thus, were formed in adequate proportions, but randomly, compact concretions of small masses.

In geology they are known under the name of pectolitas: A secondary rock.
Because of the high temperature to which is subjected the incandescent mass, the crystallization of a known mineralogical variety under the name of pectolite occurs.
The crystallization of this pectolite was done inside volcanic chimneys where the incandescent matter was pushed by gas.

So the exploitation of larimar depends on the localization of these chimneys. The extraction is done more and more deeply in the old volcano.

The jewels of larimar are available in Dominican Republic, and in the Caribbean. The majority of the produced jewels are assembled with silver, but the stones of higher quality are often assembled on gold.

One evaluates the quality of the stone according to his coloring: deeper is the blue and more the stone is invaluable.

The jewels of high quality use stones between blue sky and major blue, often by linking them. Greenish colorings are also known but are not well considered, unless the green is intense. Red colorings in Larimar indicate iron traces.

It should be noted that pectolites are photo sensitive; this is why the Larimar loses its blue coloring with the passing of years.

In the circles metaphysics one says that this colored gemstone can look after; as with the majority of the crystals and gemstones, there is no scientific proof on this subject.

Female gem of an extreme softness, it brings calms and balances, and would facilitate the childbirth…

On the psychological level it would bring serenity and love in its environment, and would stimulate the creativity. 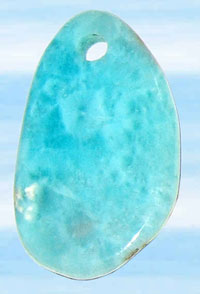 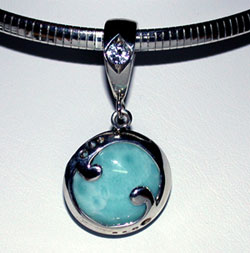 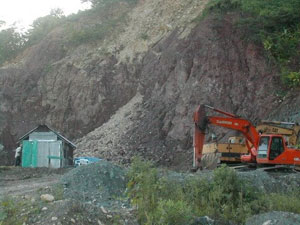 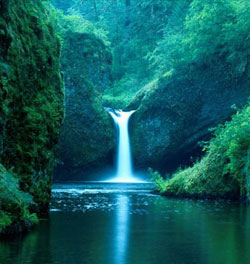