Orchid molecular extract for your skin 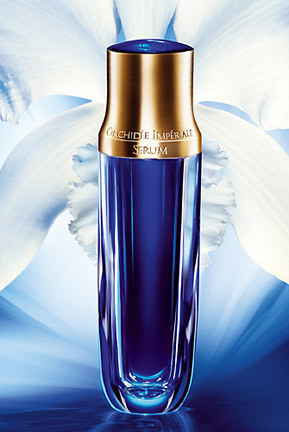 The researchers of Guerlain listed Thirty thousand sorts of orchids.
Four were retained for the Imperial Orchid line, which welcomes two new exception cares, between them a serum.

In its magic formula, a maximal concentrated of orchid molecular extract.

It increases the skin cells regeneration potential, it facilitates the natural DNA protection process, it acts on a anti-inflammatory properties protein and neutralizes an enzyme that causes overproduction of melanin, and so guarantees the brightness of the skin.

Among others things ! In addition, the Serum is enriched by a bio film (a proteins, lipids, sugars and synthesis molecule cocktail); a sort of meshing that re-tightens the skin lines, and restores brightness to face.

So smoothed out, the skin is more receptive to the Serum actions.

Clearly, this elixir coiled in its blue sapphire bottle smoothies the skin texture and the wrinkles, hydrates it during all day and makes the epidermis more shining.

And those who have not slammed all their money during the sales will take advantage to offer themselves the new Imperial Orchid Cream, to rest after the Serum !