This initiative seeks to promote trade and tourism exchange.

The Chamber of Commerce of the Turks and Caicos Islands in the Dominican Republic was presented in Puerto Plata, with the objective of promoting trade and tourism exchange, with the participation of businessmen from both nations.

César José de los Santos, president of the chamber, indicated that the initiative seeks to stimulate trade between the Dominican Republic and the Turks and Caicos Islands, which has an enormous potential in different areas, as well as the realization of seminars and events to promote ties of friendship and business relations.

He emphasized that the Turks and Caicos Islands have a high level of tourism development with which Dominican tourism should be more associated, thanked the receptivity of that territory for thousands of Dominicans who live there and work in the tourism sector and other areas, he also noted that companies such as Helados Bon are already installed in Providenciales, regarding the presence at the event of José Moreno, shareholder of that company.

De los Santos proposed the realization of a free trade agreement between the Dominican Republic and the Turks and Caicos Islands, which will benefit the Dominican productive sector.

Caesar Campbell, vice-president of the entity, valued the initiative that seeks to promote the business climate, with the hope of reaching at some point, a free trade environment that will allow the investments in both nations to grow even more. 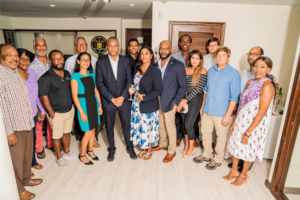 The honorary consul of the United Kingdom and Great Britain for the northern zone, José María Spart greeted on behalf of the British ambassador to the Dominican Republic, Mockbul Ali OBE, the creation of the chamber.

Fernando Gonzalez, president of the round table of the Commonwealth countries in the Dominican Republic, offered his country’s full support to the new chamber and highlighted the role played by the British, Canadian and other Commonwealth countries’ chambers of commerce in promoting trade, which has increased exponentially since the creation of the British Chamber of Commerce 40 years ago.

Alvin Hegner, a founding member of the chamber, spoke on behalf of the Premier of the Turks and Caicos Islands, Washington Misik. He highlighted the importance of the entity and advocated for the simplification of business procedures for greater integration, given the proximity of the islands and the existence of regular flights in the airports of Santo Domingo and Santiago, hoping for the same flow for Puerto Plata.

He also mentioned the relationship with the medical facilities of the country where patients are frequently transferred by air ambulance to clinics in Santiago.

Yasmara Mejía, executive director of the chamber, urged businessmen interested in doing business with the Turks and Caicos Islands and learning about their potential, to approach the chamber and apply for membership to participate in the initiatives that will be carried out in the coming months. He also announced that the formal presentation of the chamber in Turks & Caicos will take place soon.