ProDominicana presents trade and investment opportunities in the UK

As part of the celebration of the IX Dominican Week in the United Kingdom, the Export and Investment Center of the Dominican Republic (ProDominicana) presented the business opportunities offered by the country to companies, diplomatic representatives, investors and potential buyers at an event held at Canning House, which was dedicated to exposing the country as an investment destination in the Caribbean.

It is worth noting that in the annual period 2015 – 2021 and accumulated January-August 2022, the Dominican Republic’s trade exchange with the United Kingdom was US$2.3 billion, with 64.1% corresponding to imports of goods and the remaining 35.9% to exports, which have grown by almost 6% so far in 2022. In terms of investment for the period 2011 – 2021, FDI flows from the United Kingdom amounted to US$111 million.

Biviana Riveiro, executive director of ProDominicana said: “The Dominican Republic is the ideal destination for doing business, as it maintains a steady growth and a stable political environment, thanks to export and investment attraction policies, its strategic location as a Logistics Hub and its productive assets. The performance we have had is thanks to the joint work of the government, companies, foreign policy, added to the favorable climate for settling in the Dominican Republic, which has a set of incentives and human talent that contribute to our regional positioning.

The event was led by the president of the British Chamber of Commerce of the Dominican Republic (BRITCHAM), Mr. Amauris Vásquez; the Dominican ambassador to the United Kingdom, Elnio Durán; the ambassador of Her Majesty of the United Kingdom in the country Mockbul Ali, who presented the importance of continuing to strengthen cultural and commercial relations and the strategy of promoting the orange economy between the two nations, and various priority sectors that contribute to sustainable and inclusive development. 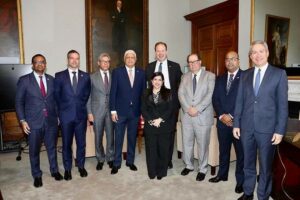 The program of activities developed from the direction of ProDominicana together with members of the delegation of this day, included a series of meetings between British business and trade organizations such as: the meeting with the Minister of State Jesse Norman, from the Overseas Development and Commonwealth Office, with whom they discussed the promotion of the strengthening of the bilateral relationship; the British Confederation of Industry; the London Chamber of Commerce, the British International Investment center, among other commercial activities such as an exploratory visit to the DP World company and Compagnia Frutieri where they could learn about logistical procedures and see the Dominican products that arrive in the United Kingdom through the port, as is the case of bananas.

The ProDominicana team also held meetings with Baroness Hooper, trade representative of the Prime Minister of the United Kingdom and attended the presentation of ASONAHORES representatives, Paola Rainieri, past president and Andres Marranzini, executive vice president, who explained how the Dominican Republic became the number one country in the world in tourism recovery and its future prospects.

As part of the mission’s agenda, ProDominicana’s executive director, Biviana Riveiro and investment director Marcial Smester were interviewed by the Financial Times newspaper where they discussed the Dominican Republic’s business opportunities and the successful recovery of the post-pandemic economy.

The IX Dominican Week in the UK concluded with the artistic presentation of the outstanding Dominican violinist Aisha Syed Castro, in her concert “HERITAGE by Candlelight”.