The volume of bilateral trade between China and the Dominican Republic has increased by 90 percent, despite the negative effects of the pandemic, Chinese Ambassador Zhang Run informed.

“Bilateral trade has been developing in an expeditious manner, the volume has increased by 90 percent in the four years; this amount is 4.3 billion dollars,” said the ambassador.

The diplomat said that in the first six months of this year the volume of trade exchange has grown by twenty percent and noted that Dominican exports are increasing at a rate of 101 percent.

According to data supplied by the Embassy of the People’s Republic of China from January to June 2022, total bilateral trade between China and the Dominican Republic amounted to US$2.144 billion, which represented an increase of 20.54 percent year-on-year.

He further explained that of that amount, exports to the Dominican Republic were US$1.889 billion, representing a 14.35 percent year-on-year increase

While imports from the Dominican Republic were US$255 million, an increase of 101.28 percent year-on-year. 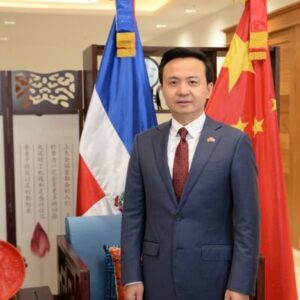 The representative of the Asian country said that bilateral trade between the two nations has grown at a substantial level by 25 percent per year.

We invite you to read: Some 80 thousand tourists stranded in Chinese tourist city due to covid outbreak

When interviewed on the program El Día, broadcast by Telesistema channel 11, the diplomat highlighted that these exports correspond to 54 percent of minerals, but also highlighted that the products of the free trade zones, specifically medical devices, have increased by 40 percent in the last two years.

Meanwhile, Dominican tobacco exports to the Asian giant have increased by 1,500 percent in the last six months; rum and coffee are also among the agricultural products that the Dominican Republic sells to China.

The diplomat stressed that these four years of diplomatic relations between the Dominican Republic and the People’s Republic of China have been positive and healthy under the principle of one China and mutual respect.

“We have had four years of diplomatic relations developing in a healthy way, based on the principle of one China and mutual respect,” said the ambassador.

During this time of diplomatic relations they have carried out cooperation projects ranging from the donation of fire trucks, traffic control engines, sugar cane harvesters and garbage compaction trucks, he said.

He said that they are currently working with the National System for Emergency Attention and Security, 9-1-1, carrying out an update of the technology method.

“Technology continues to advance and the cooperation is to technologically upgrade the entire emergency system with donations of sophisticated equipment,” Zhang Run said.

He also highlighted the importance of this emergency system for the attention and citizen security of the Dominican people.

He pointed out that one of the brightest spots in the bilateral relations between the two nations has been the cooperation between the governments in the fight against the pandemic.

He explained that so far the People’s Republic of China has donated to the Dominican government medical materials corresponding to 120 respirators and 1.2 million masks.

“At the time of the most intense supplies we provided the Dominican government with 15 million doses of vaccines.”

He said that they annually grant 15 scholarships to the Dominican State and currently more than one hundred students are in the Asian country.

He pointed out that in these four years of relationship between both nations more than two thousand people have received training in different educational areas and they are mostly young people.