World representative of the Dominican beauty 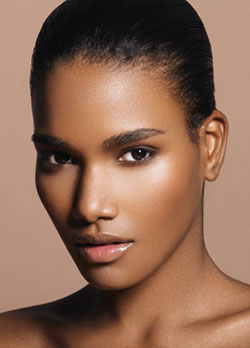 Arlenis Sosa is the name of a young beauty who was born a day of 1989, in the village of Montecristi, Northwestern zone of the Dominican Republic.

Arlenis Sosa became, at only 19 year-old, the new icon of the black beauty in the fashion world, and her beauty and unpretentious mind make her to become one of the most in vogue world model of the moment.

Alernis Sosa, who comes from a modest and numerous family, was starting to study communications in a university of Santo Domingo, when she was discovered by the fashion designer Luis Menieur.

This one said, as he referred to his first encounter with Arlenis on the Malecón of Santo Domingo:

Since I saw her, the first things I liked were her size and her slimness, but I really discovered her potential when I realized she transformed with every hairdressing, with every wearing.

The designer was right, since only a few months after arriving to the United States of America, Arlenis Sosa has already a very nice record of achievements:

In her everyday life, she works with the most famous models of the world, as Iman, Raquel Zimmerman, Naomi Campbell, Alek Wek, Lya Kebede, Chanel Iman, Jourdan Dunn, Carolina Trentini, Jessica Stam and many others.

Concerning her professional life as a model, we can emphasize her presence on many pages and covers of prestige as Time Magazine, Harper Bazar, ID Magazine, Interview, W magazine, Path, French, Italie and American Vogue.

On the catwalks, she made shows for Oscar de la Renta, Carolina Herrera, John Galiano, Narciso Rodríguez, Dolce & Gabbana, Enmanuel Ungaro, and took part to the world famous Victoria’s Secret fashion show, brand name with which she is now preparing a photo session.

Besides being the image of the H& M and Gap stores, she became, in March 2009, the first black woman to represent worldwide the Lancôme cosmetic name.

A great career for the young Dominican, who does not forget what is more important to her: love to her family who still live in Dominican Republic.

I always wanted to have money, not just to have it, but to help.

She wants to help her brothers to study in University, as she keeps in mind she wants to finish her career too when possible.

Arlenis Sosa is without any doubt a young girl with a lot of qualities: humble, responsible, simple and loving, she is before anything gorgeous and talented.