The Dominican Port Authority estimates that they will generate more than one million dollars.

Some 14,608 cruise passengers arrived on the Dominican coast this Wednesday 28th, through the ports of Taino Bay and Amber Cove in Puerto Plata, with which the province is expected to receive income of over one million dollars. 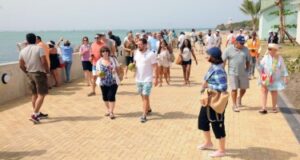 It is estimated that each tourist who disembarks at the port spends an average of US$80 at the commercial stands.

The Dominican Port Authority (Apordom) reported that at the Taino Bay terminal in San Felipe de Puerto Plata, the cruise ship Divina docked with 1,770 passengers, while the Seashore brought 4,212 passengers, for a total of 5,982 cruise passengers, between the two vessels of the MSC Crociere S.A. company.

According to the information, the Amber Cove cruise terminal, located in Maimon Puerto Plata, received 5,647 cruise passengers on the cruise ship Mardi Gras, of the Carnival Cruise Lines company, as well as the vessel named Freedom, of the same cruise line, with 2,979 passengers, for an accumulated figure of 8,626 visitors.