If you have seen Jurassic Park, you will surely remember the scene in which scientists manage to use dinosaur DNA, 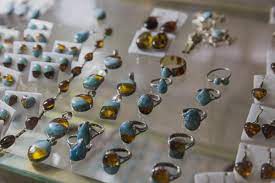 extracted from mosquitoes fossilized in amber, to bring prehistoric animals back to life. What you may not know is that Michal Crichton, author of the book and the film adaptation of this title, wrote this passage inspired by the real work of naturalists George and Roberta Poinar in the amber mines of the Dominican Republic. Some of the scenes of the film were even filmed in their laboratory. What actually happened?

In 1986, during an expedition to the mountainous region of the Caribbean country to collect samples of amber (fossilized resin that drips down from carob trees), the American couple came across something incredible: prehistoric insects that had been trapped and preserved in amber stones retained some intact cells, including parts of their DNA. But, while for Hollywood these amber fossils were the basis of a fantasy world, the Poinars used them to recreate a real world. More specifically, to reconstruct what a forest that existed in the Dominican Republic 45 million years ago looked like.

The experts not only analyzed the amber fossils they found, but also investigated samples collected by Dominican miners over the course of 20 years. Thus, in the sticky resin of the carob trees they found oddities such as bees and stingless scorpions, hairs of a West Indian rhinoceros and a saber-toothed tiger. Also, a flower of an unknown plant species, which bloomed 15 million years ago and is now extinct. And even a tick that still contained blood from the ape it bit, the only sample of red blood cells from an ancient mammal that science has ever had access to. And not only that: the sample contained a parasite very similar to one that currently causes a disease in mammals similar to malaria, with what that means for the study and progress in the eradication of a disease that kills so many people every year.

Almost four decades after the first discovery of the Poinar, research continues and this resin continues to provide valuable information on the loss of biodiversity or the process of shaping the Greater Antilles, among other aspects. But, in addition to its conservation properties and fossil remains, Dominican amber is a treasure increasingly appreciated for its uniqueness and beauty. Many even attribute healing and magical properties to it, attracting good luck.

Amber, a gift from nature

It seems that the Taino Indians who inhabited the island were the first to value and appreciate the perfection of this gift of nature. So much so that when Christopher Columbus arrived in the 15th century, they presented him with the precious pieces of craftsmanship made from it. But the Spaniards were blinded by the gleam of another golden material, gold, and that made amber fall into oblivion. It was “rediscovered” for jewelry in the early 19th century and is now, without a doubt, one of the main attractions and signs of the island.

Dominican amber, which is extracted from the mines located in the hills of La Cumbre (a community located 43 kilometers from the city of Puerto Plata), is the most expensive amber in the world because it is the most transparent and because samples have been found in incredible shades and hues. Today, it is the raw material for exclusive jewelry designs that are sold all over the world and is a source of national pride. So much so that it has an Amber Route and two museums, one in Puerto Plata itself and the other in the capital, Santo Domingo.

The route consists of an educational tour that allows to know the aforementioned mines and to deepen in the history and properties of amber. A goal that can be completed by visiting the museum of Puerto Plata, located in a Victorian-style house in the center of the city. In its different floors are exposed some of the most impressive stones of Dominican amber, including samples with plant and animal fossils, such as a lizard of almost 43 centimeters, a scorpion, a centipede, a wasp nest, and two beetles mating, whose dating is set between fifteen and twenty million years.

But if amber is today a raw material worthy of study and admiration, highly coveted in the traditional jewelry of the Caribbean country, larimar is not far behind. The Dominican Republic is privileged to possess this stone, unique in the Caribbean. It is catalogued as an unknown and unique treasure in the world, making it one of the most interesting, novel and mysterious gems known.
The history of this semi-precious stone began in 1974, the year of its discovery, and it seems that it owes its name to the daughter of Miguel Domingo Fuertes Loren, the pioneer in working with it -Larimar is the compound of Larissa, and the word sea, because of the similarities he saw between the color of the stone and that of the Caribbean Sea-. They say it instills peace, love and serenity and, because of its color and hardness, similar to turquoise, it is a perfect raw material for jewelry work. In fact, over the years its popularity has grown until it has become part of the collections of the most prestigious Dominican jewelry designers.

Currently, its School Workshop and Museum is a must for anyone visiting La Ciénaga, in Barahona. In this place, its history is explained, lapidary and jewelry courses are given and the artisans exhibit and sell their products. Visitors to the area also have the opportunity to visit the mines of Bahoruco, Barahona, to see the processes of extraction of Larimar and the departure of the workers, or to visit the workshops along the main road to observe the cutting and polishing process. Larimar has an International Day, November 22, and was declared “National Stone” because it is found only in the Dominican Republic.

The Dominican semi-precious stones of larimar and amber have unique characteristics and represent the history, essence and knowledge of this Caribbean island and its people. Designers such as Monica Varela, Joarla Caridad and influencer Danielle Barkhausen are some of the country’s own names currently working with amber and larimar and presenting proposals of pieces with great acceptance among the public. Specifically, the young Joarla Caridad, whose parents manage the Amber Museum store in the Colonial City of Santo Domingo, is the architect of The pool collection, created entirely with larimar; Monica Valera, by mixing the more traditional processes of classic jewelry with new technologies, such as 3D printing, has also worked with these materials; and influencer Danielle Barkhausen has given a boost to designs with larimar, creating pieces like a necklace in the shape of a lightning bolt that has become very popular.