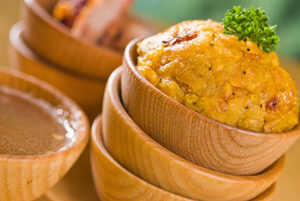 One of the biggest compliments a Dominican can give a foreigner is that he or she is aplatanado. Literally it means that the newcomer has become like a plantain, but what they’re actually telling you is that you’re one of us.

It’s not a compliment that is dished out lightly. In the Dominican Republic, plantains are much more than just a staple food; they are central to the national identity. The iconic breakfast dish in the DR, mangú, is made with boiled and mashed green plantains, garnished with fried onions and served with fried cheese or even fried salami. Tostones are fried green plantain slices – not to be confused with fritos or fritos maduros – fried slices of ripe plantain.

Dominicans are so attached to plantains that they find it difficult to imagine that there are countries where not only does it not feature in the daily diet, it is considered exotic, obscure even.

How do gringos qualify for aplatanado status ? On a superficial level it happens when the foreigner is seen to be embracing Dominican ways of doing things, like dancing, enjoying the local cuisine and using uniquely Dominican turns of phrase. Dominican friends will react with delight and pronounce the gringo aplatanado.

But eating rice and beans, dancing merengue and bachata and saying un chin (a little bit) is the least of it. The minor things that initially seemed strange, wrong or even unpleasant or annoying and go on to become normal, correct and even pleasurable are what really indicate that you’re well on your way to becoming aplatanado.

A gringa aplatanada will turn around when someone calls out rubia even though she’s a brunette, because rubia, literally blonde extends to all white people in the DR. When it rains, she won’t think twice about putting a plastic bag on her hair along with her Dominican sisters who live in fear of their hair going frizzy.

A gringo may start using the ubiquitous Dominican nose wrinkle as a gesture indicating that he didn’t hear or understand the person addressing him. And gringos who are well and truly aplatanado will accept sweets in lieu of coins in their change at the supermarket without batting an eyelid.

And it doesn’t fully hit home until you go home. All those things that used to be normal now seem so very odd – washing up with hot water, orderly driving habits, the lack of a neighbourhood colmado with a home delivery service… and people complaining about the heat of a Mediterranean summer.

This is when the foreigner who has moved to the DR finally starts to think of it as home.

Expat FAQs: Moving To & Living In the DR does not contain a secret recipe for becoming aplatanado but it contains a lot of inside information about the country and how things work there that will stop you walking round looking as if you got off the last banana boat.

With almost 30 years of aplatanamiento under their belts, as it were, Ginnie and Ilana have written a detailed handbook for prospective residents in the DR with detailed historical and cultural context, practical information about almost every aspect of living in the country, negotiating the bureaucratic procedures, unraveling its mysteries and, most importantly, understanding its people.

Return to the main page of the book

For more on plantains and other delicious Dominican foods, see www.dominicancooking.com

Expat FAQs: Moving To & Living In the DR