The country exhibits for the second time its own menina with an artistic proposal by Dominican designer Taína Almodóvar.

With a live performance of typical Dominican dance and music, the Meninas Madrid Gallery 2022, the largest outdoor exhibition in the world, was inaugurated on behalf of the Dominican Republic.

The event was attended by the ambassador of the Dominican Republic in Spain, Juan Bolívar Diaz; the new Dominican Consul General in Madrid, Miguel Vásquez Peña; the creator of Meninas Madrid Gallery, Antonio Azzato; and the Dominican artist Taína Almodóvar.

This is the second year that, in a pioneering way, the companies CEPM and Evergo, leaders in the country in the field of energy and electric mobility, together with the Embassy of the Dominican Republic to the Kingdom of Spain, put the high identity and the valuable cultural diversity of our country in this event of world reference, with innovative proposals of Dominican designers.

“La Menina Caribeña” was designed by the Dominican artist and illustrator Taína Almodóvar, who in her work captured representative elements of our country brand: the tourism, represented in the national flora and fauna, the rose of Bayahíbe”.

Besides, it shows “our seas and mountains; the culture and citizenship, represented through symbols of the national music and figures of the Dominican painter Candido Bidó; the colors, which besides incorporating blue, white and red, there are shades of yellow and orange to symbolize the warmth of our climate and the joy of our people; and the green, representing the environment and the hope.

According to the artist, this Menina reflects her desire to let the world know that “there is a country in the world placed in the same path of the sun, and that country is the Dominican Republic”. 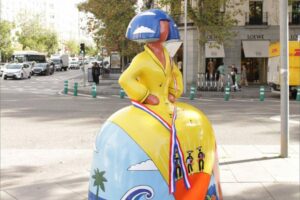 This is the first Dominican Menina painted entirely by hand in Antonio Azzato’s studio, which makes it a unique and original work.

It will be on display for everyone’s enjoyment in a privileged space in the Spanish capital, on Serrano and Goya streets, one corner from the emblematic Plaza Colón, until December 15.

“La Menina Caribeña” will be on display until December 15 in a privileged space in the Spanish capital, for the enjoyment of all, on Serrano and Goya streets, one corner away from the emblematic Plaza Colón.

The first Dominican menina, “Caras de Dominicana” continues its tour in the east of the country. It is currently on display at the Puntacana Village Commercial Gallery, for the enjoyment of all its visitors.

Meninas Madrid Gallery is an urban art exhibition that since 2018 has been displaying six-foot-tall statues inspired by the masterpiece of Spanish Golden Age painter Diego Velásquez in the busiest and most emblematic points of the Spanish capital. Fifty figures are dressed in different designs and messages with a common focus: multiculturalism.

Artists, athletes, prominent figures and tourists from all over the world visit the exhibition in the streets and squares of the city, making it a key event in Madrid’s cultural agenda. This year, Meninas Madrid Gallery celebrates its fifth edition and will feature the designs of personalities such as Paulo Coelho, Pablo Motos and others.