“From here and there“: Caribbean identity in a meeting of Puerto Rican and Dominican artists.

The exhibition is open until August 31 at the Museo de las Casas Reales.

It is a collaboration between the House of Representatives of Puerto Rico and the Chamber of Deputies of the Dominican Republic.

The brotherhood between the Dominican Republic and Puerto Rico, countries that are separated by 382 kilometers (237 miles) bordered by the Caribbean Sea, is marked in history, politics, music, sports and culture.

The Caribbean identity and its challenges have been captured for posterity in the visual arts thanks to the work of great artists from Puerto Rico, Puerto Rico and other Antillean countries.

As a way to continue strengthening cultural ties, the exhibition “De aquí y de allá” (From Here and There) was formally opened until August 31 at the Museo de las Casas Reales. 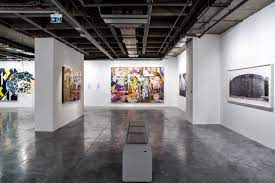 At the inaugural ceremony attended by artists, politicians and cultural managers from both countries, Alfredo Pacheco was awarded the Ricardo Alegría Medal in honor of Ricardo E. Alegría (1921-2011), a prestigious Puerto Rican archeologist and historian who was the first director of the Institute of Puerto Rican Culture.

Pacheco received it in surprise.

In February of this year, important pieces of the best of Puerto Rican and Dominican art were exhibited at the Capitol of the “Island of Enchantment”. Six months later, the Dominican delegation plays host.

The president of the Chamber of Deputies, Alfredo Pacheco, praised this initiative that brings together 20 Caribbean artists.

“It is good to highlight that this same meeting was recently held in Puerto Rico under the auspices of the House of Representatives of that country. Quisqueya returns the gesture to strengthen cultural ties,” said Pacheco.

“We are very happy. We know that the cultures of the DR and PR have a lot of identity and with this type of meeting we try to link”, said the legislator to Diario Libre.

Meanwhile, the president of the Chamber of Representatives of PR, Rafael Hernández Montañez, emphasized that there is a formal relationship between both Chambers. He said that in his country they are encouraging artists to use governmental places such as the Tous Soto Gallery, where “De aquí y de alla” was exhibited.

“We have plans to take the exhibition a little further and continue highlighting our roots,” said the politician known as Tatito Hernández.

He believes that the dynamic of the exhibition is the social theme. “This is part of an educational and socio-cultural agenda.”

“When we talk about here and there, which is the title of the exhibition at hand, there is a play on words that really point to a common legacy. They are all artists (in the show) with mature discourses and with stories that have merited their canvases or their pedestals. Some are no longer with us, but they remain current and timeless with the works they bequeathed to us,” were his words as he addressed the guests.

Award-winning artist Marcos Alegría, director of Culture of the PR House of Representatives, has among his paintings one that addresses social inequality as seen from the migratory situation, those who cross the seas on illegal voyages.

“Many times the lives of artists are offered as an oracle to see more clearly the present to value or revalue the past and dissipate the potential of the future,” said Alegria in his speech.

Another creation that invites to be analyzed is “Sea of Ancestors III”, by artist Nora Rodriguez Valles, created in acrylic on canvas, 36″ x 24″ inches.

A frank division in the painting with human figures walking forward and others standing firmly, a boat and the horizon give an explanation of the road traveled to forge what we are.

One of the national works that stands out is “Virgen de la Altagracia” by Mirna Ledesma. It is a faithful reproduction of the original painting by Clara Ledesma authorized by Galo Ledesma Terrazas.

The works of Enriquillo Amiama, recognized master of Dominican painting, are exhibited in the show. One of his paintings is “Van Gogh y la razón contenida” (2008), 40″ x 40″ inches.

He describes it as a contemporary piece where he makes use of strong colors, uses collage in mixed media on canvas. Another original touch is a phrase written at the top of the painting.

Amiama, who recently presented his 21st solo exhibition with a retrospective covering his beginnings in 1982 until 2022 at the Museum of Modern Art (MAM), was grateful to participate in “From Here and There”.

He said that Dominican curator and cultural manager Juan Jose Mesa invited him to participate because of the cultural ties they have in the two countries. He exhibited in PR and did it again in this exhibition.

In that sense, Mesa, who in addition to being an art curator also serves as director of the Center for Caribbean Art Studies of the DR, felt honored to collaborate with Ruben Moreira (curator of the Puerto Rican part).

For the cultural manager, this opens the doors to future and well-deserved exhibitions.

“The artists coincide in a reflection on our identity. Necessary seed to generate a parallel of purposes and discourses, far beyond the common interests, the strengthening of our art and our artists, the shared practices and what can be seen with the naked eye”, concludes Juan Jose Mesa in what he defines as “A magical encounter at the Capitol of Puerto Rico and the Museo de las Casas Reales de Santo Domingo”.