During this cultural event, a wide range of artistic and cultural activities, workshops, exhibitions and sales of products and handicrafts were held.

With the sponsorship of the Ministry of Tourism (MITUR), the Ecotourism Development Council held the 1st Sanchez Ramirez Cultural and Handicrafts Fair, which took place from October 7 to 9, 2022, at the Ecological Park El Peñon del Lago de Hatillo.

More than 50 local and national companies, public institutions and dozens of artisans participated in the fair, whose objective was to promote the ecotourism, cultural and gastronomic benefits of the province of Sánchez Ramírez and its municipalities.

Jarol Peña, provincial manager of the Office of Destination Management of MITUR in Sánchez Ramírez, said that this fair rescues the cultural and handicraft values, not only of this province.

He indicated that, Sánchez Ramírez is a province with great ecotourism attractions and is seeking to promote and manage visitors to Cotuí, Cevicos and other municipalities, to create wealth and social welfare. 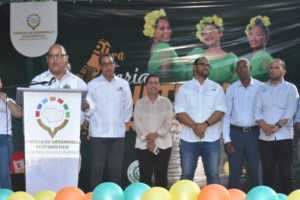 “The Ministry of Tourism is implementing the Tourism in Every Corner project, where it seeks to rescue and create emerging destinations, so that domestic and foreign visitors travel throughout the country, knowing every corner,” said Peña.

He said that, together with the Provincial Ecotourism Council, the creation of a tourism work table is being managed so that this fair is a sustainable project, that everyone is involved, so that it is not temporary and that it extends to other provinces or other municipalities.

“This province has a great ecotourism potential, so we are working so that all Dominicans and foreigners visit Sánchez Ramírez and get to know all the beauty that we have”, said Milcíades Pichardo, in charge of communications of the fair.

During this cultural event, a wide program of artistic and cultural activities, workshops, exhibitions and sales of products and handicrafts was carried out.

The educational workshops held during the fair were: History of the province, Cultural Aspects and Ecotourism of Sánchez Ramírez. There were also painting and handicraft workshops, among others.