Fortaleza Ozama: history, curious facts and where to find it

It is time to discover one of the Cultural Monuments of Santo Domingo that most surprises visitors. We are talking about the Fortaleza Ozama, popularly known as Fortaleza Santo Domingo. It is a truly spectacular building that can be found in the capital of the Dominican Republic.

This construction was built by the Spaniards during the viceroyalty. Therefore, this is one of the oldest and most historic forts in the Americas. Its historical and cultural importance is such that it was declared a World Heritage .

To know the Fortaleza Ozama in depth, we must delve into its history. This construction is part of the so-called Colonial City of the capital of the Dominican Republic. Many historians affirm that the construction of this fortress took place between 1502 and 1508, initiated by Nicolás Ovando, who was governor at the time. 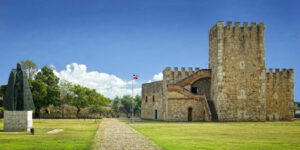 One of the issues to take into account is its peculiar name. It is due to the fact that this fortress is located near the mythical Ozama River. The construction of this fort had a very specific objective: to protect the city from the various and continuous attacks by English pirates, but also from the Portuguese and French invaders.

During the colonial era, this Ozama Fortress came to be known by the name of Torre del Homenaje (Tower of Homage). With the passage of time, it was also called Torre de la Vigilancia (Watchtower). This is due to the fact that, from the highest part of this fort, you can see both the Ozama River and a large part of the coast of the Caribbean Sea. These are dream views!

A year to highlight in the history of this fortress is 1965. In the month of April, the well-known Patriotic War broke out. Only one month later, Colonel Caamaño was elected President of the Republic. At that moment, and according to Law number 11 of President Caamaño, the Fortaleza Ozama was no longer considered a military compound.

Therefore, it became a public place, under the name of Plaza de la Constitución. As a curiosity and throughout the years, at the highest point of the fortress, several flags have flown. Among them, the flags of Spain, the United States, France, England and even Haiti. Currently, we find the flag of the Dominican Republic.

La Fortaleza Ozama, through its characteristics

It was originally designed in the shape of a castle and it is worth mentioning that, at present, it preserves its original architecture. We must take into account that, in the interior of this fort, there are numerous tunnels but also a great number of dungeons. As a curious fact, Christopher Columbus is one of the most illustrious characters who was locked up in the same place.

As if that were not enough, we should know that this fortress consists of a keep, the Carlos III Portal, the statue of Gonzalo Fernandez de Oviedo, the Fort of Santiago, the Powder Magazine, the Low Shooting Platform and, of course, the High Shooting Platform, among many other elements. It is simply spectacular!