Making its way through winding roads riddled with lush vegetation, and as a backdrop the turquoise blue of its waters, appears imposing Santa Bárbara de Samaná, the capital of the peninsula that bears his second name, Samaná. The wildness of its nature, endless virgin beaches, local hospitality and tourism focused on environmental care, are the characteristics of one of the most attractive and surprising areas of the Dominican Republic, so it is not surprising that they exclaim that this area of the country is “a different Caribbean”.

Its history begins long before the arrival of Columbus, with the Taino domain, the indigenous people that inhabited a good part of the Caribbean territory. However, the foundation of what today is the colorful and beautiful capital of the province, Santa Bárbara de Samaná, was made in 1756.

Its air of a fishing village and its colonial wooden houses, cheerful and full of color that dye the Malecon or Avenida de la Marina in pinks, blues, greens or yellows, are part of the essence that surrounds it. Just like the history that the waters of this bay have seen, where for years Europeans and Haitians have disputed its terrain and where every year, from December to March, humpback whales make it their mating and breeding place, serving as an attraction for locals and tourists. 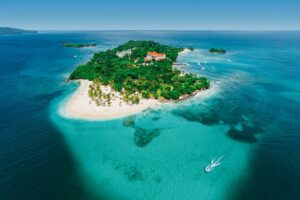 The diversity and cultural heritage of this region is fascinating. Proof of this are the petroglyphs and pictographs left by indigenous peoples on the walls of the caves; the plurality and diversity of religions – Protestant, Catholic and Methodist – found among its churches; the traditional dances, ranging from African bamboulá to bachata; or the culinary heritage, which mixes Anglo-Caribbean roots with Dominican Creole cuisine. This is the Samana Peninsula, a virgin paradise where you can discover the Dominican essence from another point of view.

To tour its capital is to delve into the mix of cultures and discover the local from within. One of these places is the Central Market of Samaná, where you can learn about the tropical products grown in this area such as corn, rice or coconut, of which this region is the largest producer on the island. Or eating at one of its local restaurants such as Tierra y Mar, where it is essential to try the lambí, crab dough, Samaná-style fish or arroz moro de guandules (black beans that add color to the rice cooked in coconut milk). At nightfall, it is also worth going for a drink at one of the drinks located on the boardwalk, where you can enjoy beer and local music.

THE EMBLEM OF THE CITY

One of the most emblematic buildings of Samaná, in addition to its boardwalk, is La Churcha. A cultural heritage site, this wooden church of Gothic design was built by freed African-Americans in the 18th century after the Haitian government offered them free farmland. Its name is a Dominican twist of the English word church and the African Methodist faith is practiced inside.

For centuries, the populations of humpback whales that used to sail these waters were captured to eat their meat, use their oil as fuel and their baleen as tools, causing their population to decline dramatically by the mid-19th century to the point of becoming a seriously endangered species.

However, the struggle to recover the species and the desire to make Samaná a sustainable and ecological paradise have once again made Samaná Bay one of the best places in the world for whale watching in their natural habitat. Its warm, protected and shallow waters are the reason why every year nearly 2,000 whales migrate here, on a long journey from the North Atlantic to the Caribbean, to socialize, mate and give birth to their calves.

All this is told to perfection at the Whale Museum of Samaná, a place to learn about these mammals and serves as a fundamental role in local education about whales and the habitat in which they live.

THE JEWEL OF NATURE

Declared a National Park in 1976, Los Haitises (which in Taino means mountainous land) is one of the jewels of Dominican nature that is worth visiting on a short boat trip.

With an extension of 1,600 square kilometers, this natural landscape is full of rock formations, cays, mangroves -which serve as home to birds, plants and all kinds of marine animals-, deserted beaches and caves that can be visited, such as the Archangel San Gabriel. Among its fauna you can see pelicans, herons, the Ridgway’s hawk, the Sierra woodpecker or the Hispaniola.

Another excursion not to be missed from Samaná, along with a visit to Los Haitises, is Cayo Levantado. This islet, also known as Barcardí Island because one of the brand’s most famous commercials was filmed there in 1970, is only five kilometers from Samaná Bay. Its wild nature, white sand beaches lined with palm trees and its small bars and restaurants serving local cuisine, make it a real attraction.

One of the most common excursions from the capital is a visit to Las Terrenas, a village with an island atmosphere that develops along a large boardwalk where the restaurants, bars with chill out and sea views, as well as small boutique hotels made of wood, are its main attraction. In addition to its impressive beaches, such as Playa Bonita or Playa Cosón, where street vendors selling coconuts, raspadillas and piña coladas help to cool off from the heat. At nightfall, this area is filled with music ranging from bachata to R&B, making this little fishing village the center of Samaná’s party scene.

At the northern tip of the Samana peninsula is a remote fishing village that conquers all who pass through. It is called Las Galeras and it is, literally, an earthly paradise. It is home to some of the most beautiful and wildest beaches in the Dominican Republic, such as Playa Rincón, an extension of white sand safeguarded by rocky mountains full of lush tropical vegetation.

If you travel there, you should take the opportunity to eat at the Rincón Rubí restaurant before reaching the beach, where they prepare local cuisine. Rice with beans, fried fish, patacones, fried yucca, salad and tropical fruits for dessert.

El Limón Waterfall is another unforgettable experience in the Samaná area. It is an adventurous journey of 5 kilometers in total (it can be done on foot or on horseback) that takes visitors through the island’s jungle landscape to one of the most beautiful waterfalls in the area, the El Limón waterfall, which falls from the top of the Sierra de Samaná at a height of 40 meters high.

Its crystal clear and sparkling waters, those of the Limón River, are the perfect place to practice canyoning or take a swim in the freshwater pools that form in the town of El Limón. Or end up relaxing on the beach that bears the same name, El Limón beach, a beautiful place to enjoy an area that was once home to pirates who roamed Samaná.

THE WAY TO GO AROUND IT

Touring this peninsula full of activities and unimaginable environments requires a car. Not only because of the freedom to stop wherever you want, but also because of the nature of the terrain and the difficulty of finding public transportation to reach them.

Another alternative are the excursions organized by Coming2, who have created a series of natural, cultural and historical routes around the Samaná peninsula that allow travelers to get to know this area like a true local and reach the most hidden corners of the island. The ultimate goal is not to miss anything!

The growing boom in environmental care and ecotourism in the area is encouraging the proliferation of small boutique hotels focused on sustainability, as well as ecolodges in the middle of villages and unimaginable places like the Tree House Hotel, located in the village of El Valle.

But for those seeking tranquility and comfort, there are also alternatives such as the Luxury Bahía Príncipe Samaná. A hotel located between the city of Samaná and the fishing village of Los Cacaos; an accommodation with a beautiful private beach full of vegetation, swimming pool, Jacuzzi, spa and four restaurants (one Italian, one specialized in meats, a buffet and another more gourmet).