Pereyra emphasized that some of the hotel projects financed by Banreservas are almost completed and are only awaiting their openings.

The general manager of Banco de Reservas, Samuel Pereyra, highlighted the efforts of the bank in favor of the tourism sector with the financing of several hotel projects in different areas of the country already established and under development.

He informed that they have already started to execute projects that widen their tourism portfolio in destinations such as: Santo Domingo, Miches, Bergantín, in Puerto Plata and Pedernales. 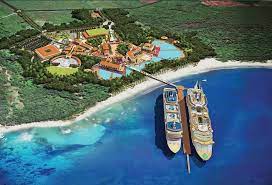 “We have the case of Miches where we are working on several projects jointly with the private sector. The first of these, and which almost opens its doors as of October 1, is the 496-room Temptation Miches Resort hotel, which is of Mexican and Dominican capital,” he added.

He said that in the case of Santo Domingo they financed the Mexican-owned Aloft Hotel, another Marriott International brand, which would have 192 rooms.

“We have come to support and we have been growing our tourism portfolio betting and financing tourism projects of hotels that involve new rooms that will bring to the sector to receive more tourists and therefore an improvement in the national economy, he added.

Pereyra emphasized that some of the hotel projects financed by Banreservas are almost finished and are only awaiting their openings.