The candidate of the Dominican Liberation Party, Danilo Medina, was elected as the new president of the Dominican Republic with 51,21 percent of the votes, according to the last bulletin issued by the Central Electoral Board (JCE).

With these results, Danilo Medina was elected as successor to President Leonel Fernandez, who also was from the PLD party.

Who is Danilo Medina ?

Danilo Medina Sánchez was born on November 10, 1951 in Arroyo Cano, as the first of eight children. In 1987, he married psychologist Cándida Montilla and has three daughters

He is the oldest of eight brothers born of Juan Pablo Medina and Amelia Sánchez. Since he was 18 years old he was a student leader, founding the San Juan de la Maguana branch of the Frente Revolucionario Estudiantil Nacionalista at the UASD. 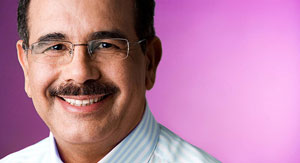