The President of the Republic Luis Abinader and the Minister of Tourism, David Collado, inaugurated on Tuesday the pedestrian access road to Playa Costa Esmeralda, as well as the Temptation Hotel in this municipality.

In the ceremony led by President Abinader, MITUR inaugurated the access road to the beach of Costa Esmeralda, as well as the construction of a detachment and a parking lot, at a cost of RD$ 51 154 560.29.

The President of the Republic, Luis Abinader, stressed the importance of these small works for those who visit the beach and those who live there.

The Minister of Tourism, David Collado, said that works like these have a direct impact on small and medium-sized businesses that operate there.

“We believe in tourism that has a direct and beneficial impact on the population, because tourism has a human face,” said Minister Collado.

The work, carried out by the Committee for the execution of infrastructure of tourist areas (CEIZTUR), has a cafeteria, an area for selling handicrafts and toilets. 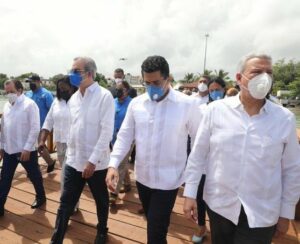 It also has a detachment of the POLITUR and the Dominican Navy, to ensure the safety of national and foreign visitors, which has dormitories for its staff (kitchen-dining room, terrace and bathrooms).

Among the works carried out are the embellishment of the road with paving stones, parking for 40 cars, 2 buses, landscaping, lighting and urban equipment.

Environmental protection was also taken into account by demarcating the area to protect the dune area and turtle nesting.

The event was attended by the Vice Ministers of Tourism; Gabriel Español, director of CEIZTUR of MITUR; Minoru Matsunaga, director of POLITUR, among other personalities of the tourism sector, municipal and provincial.

It is one of the most beautiful beaches in the Dominican Republic, with turquoise waters and gentle waves, surrounded by a large number of coconut trees.

Playa Esmeralda offers a pleasant and quiet stay, where it offers beautiful views and sounds of nature.

This area is located in the dune system of the coast, moreover, every March it becomes a nesting area for tinglar turtles; which makes this area a preservation zone.