A meeting was held at Fitur 2023, attended by the Dominican Minister of Tourism, David Collado, and Juan José Hidalgo, president of the Globalia Group.

Minister Collado detailed that, ‘for us it is a great honor to receive Mr. Pepe Hidalgo, president of Air Europa who for years has given support to the Dominican Republic in this important connection of this airline from Spain to our country’.

The Dominican minister said that the main challenge for the Dominican Republic is to guarantee air connectivity for the summer, which is why signing this agreement fills us with pride and satisfaction. 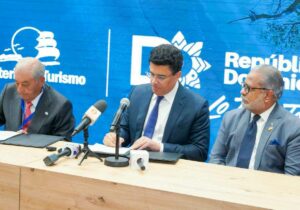 Meanwhile, Juan José Hidalgo, has been satisfied with the signing of this agreement, reaffirming that his company bets a lot for the Dominican Republic, and announced that in June they will fly between New York, Santo Domingo and Madrid.

We will put the best aircraft in the world on this route to increase the connectivity that is needed and provide the best service, he informed, commenting that in the winter they fly to Santo Domingo with one frequency, which should be increased for the summer.

For his part, Collado thanked the support of Air Europa for the announcement of the new flight that will connect Santo Domingo with New York and Spain, and the increase of two or three frequencies for the summer to the Dominican Republic, where long-haul flights are the main challenge.