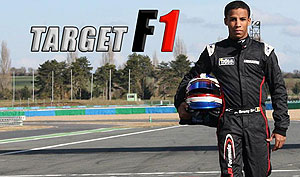 He’s looking for sponsors in his country to reach the F1.

Benjamin Breny is a young driver native of the Dominican Republic, and is the only Dominican who has this talent that could lead him to the gates of the F1. He’s the only one that fills the geographic gap of Afro-Caribbean drivers in the universe of future F1 champions, giving him the keys of an extraordinary commercial and sports success.
Benjamin represents a huge opportunity of worldwide recognition for its partners and the Dominican Republic.
The main leaders of the global auto industry, as Mr. Bernie Ecclestone, F1’s Manager, see as good news and great interest his arrival in the elite of this high-level auto sport and the Dominican Republic’s involvement in this project.

In order to help Benjamin to reach this level in the best conditions, he and his team are looking for sponsors and financial partners in the Dominican Republic, among the most prestigious entities of the country, but also among the government official who will surely be pleased to see the arrival of this fellow at this level of international competition, putting up the colors of the Dominican flag in the stands of the largest global automotive circuits, such as the one of the Principality of Monaco, for example.

Benjamin currently lives in Europe, but will be in Dominican Republic, with his manager Henri Luzet, and his pilot coach Roberto Moreno, from February 13 to 23, 2012, in order to introduce him to national leaders as well as the press members who will have kindness to receive him.
Surrounded by the best
Benjamin Breny besides having a unique talent receives the unconditional support of personalities from the world of F1, a unique advantage.

Roberto Moreno, meanwhile, is the famous Brazilian racing driver who was born on February 11, 1959 in Rio de Janeiro. He took part in several seasons in Formula 1 world championship between 1982 and 1995. In 42 qualifications in Formula 1, he registered 15 points and reached a podium (2nd in Suzuka in 1990). Test driver for Scuderia Ferrari in 1988, and signed as official driver with Benetton in 1990.

The technical director of Benjamin is Philippe Gautheron, a recognized engineer in the sports car, Director of AC Group Spain, of Virage Racing Academy, G-TEC Sport and engineer at Addax Team, Mercedes-Benz and BMW, with several wins in GP2 , F3 and GT3.

In Dominican Republic, Benjamin Breny is represented by the president of the renowned firm Cariben Consulting Invest: http://www.dominican-republic-live.com/dominican-republic/news/year-2011/november-2011/jean-leonard-cottone-consultant-charged-of-the-franco-dominican-relations.html

Any person or organization interested in sponsoring Benjamin Breny can send an email to the following email: [email protected]

Dominican Republic Live extends its sincere congratulations to Benjamin Breny, wishing him the best as well as for his future sponsors.