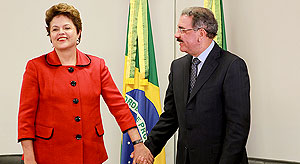 The President-elect of the Dominican Republic, Danilo Medina, met yesterday afternoon, Monday 9 July, with the President of Brazil, Dilma Rousseff at the Planalto Palace. He described the meeting as very productive.

He said that Rousseff promised support for the energy sector in the Dominican Republic. During his visit to Sao Paulo Medina spoke about the DR’s major energy deficit. He asked Brazil for backing for building two power generators, each with a capacity to produce 300 megawatts. We need to increase the electric energy supply in order to give industry a greater boost and generate more jobs, he said.

Because it has not been decided if the plants will operate on natural gas or coal, they do not know the amount of financing that the government will need for their construction and Dominican technicians will travel to Brazil for follow-up meetings.

The President-elect also requested support for education and for fighting poverty. News reports indicate that Medina met with Tourism Minister Gastao Vieira and his team at the Brazilian Ministry of Tourism prior to meeting President Rousseff.

The number of Brazilian tourists visiting the DR annually is at 20,000 and growing with the start of new direct flights. Forecasts are for 60,000 tourists by year’s end, most headed to the Punta Cana beach resorts. Moreover, Brazilian company Odebrecht is building major road infrastructure in the Dominican Republic, including the Coral Highway that will link Punta Cana, the country’s largest hotel area, with the capital city.