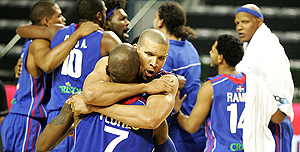 Dominican Republic national team reached a bronze medal at the FIBA Americas tournament in Mar Del Plata, Argentina, the nation’s first medal ever at the event.

Horford averaged 19.0 points and 9.2 rebounds as the Dominican Republic recorded a 6-4 record. Its previous best finish was fifth in 2009.

The team defeated Puerto Rico, 103-89, in the bronze medal game on Sunday, led by Horford’s 23 points, 12 rebounds and seven assists, all team highs.

While the Dominican Republic missed out on qualifying for its first Olympic berth, the team is still alive for a spot and will play in a world Olympic qualifier at a time and location to be determined.

El Origen now has a Denomination of Origin

Award given to outstanding Dominican in the United States