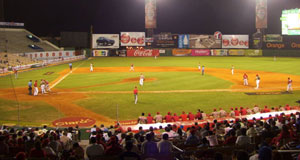 At the capital’s Quisqueya Stadium

The 53rd Caribbean Baseball Series will begin on Thursday with the participation of four champion clubs at the winter league in Mexico, Puerto Rico, Venezuela and the Dominican Republic.

According to the competition schedule, the Aragua Tigers of Venezuela, will debut on Thursday at the capital’s Quisqueya Stadium against the Indians of Mayagüez (Puerto Rico). Afterwards, the Obregon Yaquis (Mexico) will play against the local Leones del Escogido.

According to the schedule of the Caribbean Confederation of Professional Baseball, the event will be held until February 7 and will consist of a two-round Round Robin system (all-around).
The Caribbean Baseball Series was first held 1949 in Havana, where the local team Almendares won the tournament with six victories and no defeats.