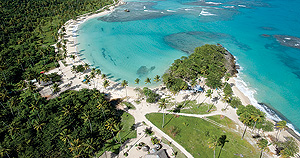 It will represent a notable increase in visits from North America

The leading travel wholesaler from the United States, Apple Vacations, announced a 30% increase in charter flights from North America to the Dominican Republic.

This will represent a notable increase in visits from United States tourists to the country.

Tim Mullen, Apple Vacations senior vice president, after a meeting with Tourism Minister Francisco Javier Garcia, said that next year the charter flights from the United States handled by the tour operator will increase from 21 to 32 flights a week, as a clear sign of confidence in the Dominican market.

During the meeting we reviewed the progress we have made in 2011 and discussed the future plans between the Dominican Republic and the United States and the new flights planned for 2012, said Mullen.

For more than 40 years Apple Vacations, America’s favorite vacation company, has grown to become one of the largest tour operators in North America.