The Ministry of Education (MINERD) announced that between Tuesday, November 22 and Saturday, November 26, the Dominican Republic will host four international events in which the present and future of education in Ibero-America will be analyzed.

The events, headed by the Minister of Education, Ángel Hernández, will be attended by the highest authorities of education and culture of the Ibero-American countries and will be held in the halls of the El Embajador Hotel.

II Forum of Safe Schools of the SICA Region

During the II Forum of Safe Schools of the Central American Integration System (SICA) region, strategies oriented to risk management in educational centers in the face of natural events will be analyzed.

The activity, which is being carried out in conjunction with the Central American Educational and Cultural Coordination (CECC) and the Regional Education Group for Latin America and the Caribbean, as well as the Coordination Center for Disaster Prevention in Central America and the Dominican Republic (CEPREDENAC), will focus on the review and follow-up of the Declaration of the First Forum of the Safe Schools Global Initiative of the SICA Region for school safety. 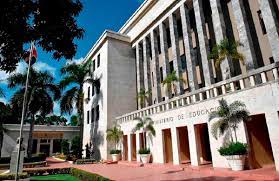 It will also address issues related to the achievements, results, challenges and challenges in the implementation of the Declaration by the Ministries of Education, as well as the roadmap agreed at the last forum.

During the 47th Meeting of the CECC/SICA Council of Ministers of Education and Culture, the report “Two Years Later. Saving a generation. The impacts of the pandemic in the countries of the SICA region” will be presented.

Also, the progress reports on the initiative for the Strengthening of Learning Skills: Roadmap, the Contingency Plan for Education: Common Conceptual Framework for the Curriculum in Emergencies and the Regional Teacher Training Program; the Regional Policy for Recognition, Validation and Accreditation: Roadmap; Comprehensive Disaster Risk Management: Safe Schools Forum; Project Proposal for Inclusive Education; Promotion of Healthy Lifestyles: Food and Nutrition Education, as well as the Women’s Human Rights Program.

XIV General Assembly of the Organization of Ibero-American States (OEI)

On Friday 25, President Luis Abinader will be present at the General Assembly of the Organization of Ibero-American States for Education, Science and Culture, which is the highest authority of the organization.

The Assembly is made up of official delegations from member states.

During the XXVII Ibero-American Conference of Ministers of Education, reports will be presented and topics such as “Inclusive, equitable, safe and healthy schools”, “Learning and competencies for life, work and sustainable development”, and “Teachers, teaching and the teaching profession” will be discussed.