Damien’s arrival into the world on Tuesday night made him the 8 billionth inhabitant of the planet. The newborn was born at the Nuestra Señora de la Altagracia Maternity Hospital in Santo Domingo, Dominican Republic.

Dr. Michael Trinidad assisted the 35-year-old mother. According to the professional, the delivery took place without any complications and the baby weighed 2.77 kilos. He also expressed his pride in participating in the birth of the 8 billionth inhabitant.

The birth of Damien marks a milestone in population growth by bringing the world population to this figure that the United Nations Population Fund (UNFPA) makes visible under the slogan “8 billion stronger”.

The national representative of UNFPA, Sonia Vázquez, who attended this event, said that the arrival of the baby represents “a lot of hope that all children born on this planet (…) we receive them with conditions. That is what we are striving for, zero maternal deaths, zero morbidities, zero diseases and health”.

Fertility is declining, but life expectancy continues to increase, while international migration is shaping demographic change. The world’s population is aging rapidly and women are living longer than men. On the other hand, birth rates vary from country to country. 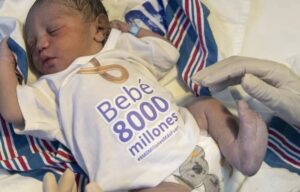 In the Dominican Republic, the population was estimated at 10.8 million in 2020, according to projections by the National Statistics Office, with 82.5% living in urban areas.

As detailed by Velázquez, the country is experiencing a steady aging process. However, its overall fertility rate, which is 2.3 per woman, is in line with the average for the region. The high number of teenage pregnancies, double the world average, is a major challenge that must be faced.

UNFPA has emphasized that in order to develop demographic resilience in the world, it is necessary to invest in better infrastructure, education and health care, as well as to guarantee access to sexual and reproductive health and rights.

Barriers based on gender, race, disability, sexual orientation or migration status that prevent people from accessing the services and opportunities they need to thrive must be systematically eliminated.