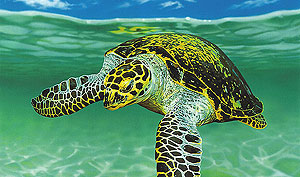 The Dominican Government renewed the ban on hunting, killing and sale of four turtle species for 10 years, including the hawksbill, which is among the protected species, the Environment Ministry said Wednesday.

The hawksbill turtle (Eretmochelys imbricata) is in danger of extinction and for years was illegally hunted for its shell used in handicrafts, sold openly to tourists in hotels, airports and shops in the Dominican beaches.

We’ve been working with artisans and they know it is forbidden to sell hawksbill, said senior Environment Ministry official Ivelisse Figueroa. On Tuesday The Presidency issued a decree banning the hunting, killing, egg gathering and marketing of loggerhead, hawksbill, leatherback and green turtles during 10 years.

In addition to the ban, the 2007 Free Trade Agreement, FTA, with the United States and Central America and the local environmental law prohibits the hunting and marketing of turtles since 2004.

Despite the bans the sale of items crafted from hawksbill continues in resorts, including clocks, handbags, combs and even stuffed turtles, which led the U.S. Humane Society International to sue Dominican Republic in 2007, under the provisions of the Free Trade Agreement.

The organization insisted in early 2011 that the Dominican government had not done enough to protect the turtles.

Figueroa added that since 2009 the Environment Ministry has confiscated since more than 5,000 pieces of tortoiseshell in tourist shops and has conducted workshops with artisans to eliminate their offering all products from sea turtles. The artisans have found a replacement and now there’s no more hawksbill in the stores.