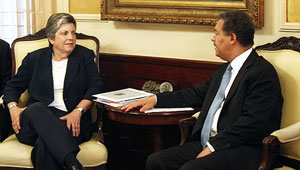 Napolitano, before heading to the National Palace, signed a memo for the start of operations of unmanned aircraft Predator, according to Presidency Antinarcotics adviser Marino Vinicio Castillo, who was in the meeting in the US Embassy.

Upon leaving Fernandez’s office, the US official declined providing details of the agreements, but called them productive because in her view help bolster trade and security between both countries.