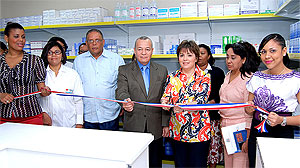 The Dominican government’s People’s Pharmacy program was recognized yesterday, Monday 25 June at the 10th Anniversary of the United Nations Public Service Day Awards Ceremony.
The United Nations presented the Dominican Republic with the prestigious award in the category of improving the delivery of public services for the program that is carried out by the Program for Essential Medicines n Promese.

The program is directed by Elena Fernandez Nunez, President Leonel Fernandez’s sister. She said that the greatest prize is the benefit that the Dominican people receive from having access to the medicines.

The program primarily deals in making readily available imported generic low-cost medicines. Promese/Cal has a network of pharmacies that provide expanded health services, improved quality in services, and increased training and personnel management. The initiative also works to strengthen the image of the institution, continue improvement of its processes, as well as expanding and strengthening the distribution network for supplies and drugs.

Promese has resulted in better access to medicines of certified quality and other pharmaceutical products to the most vulnerable groups. There has been a marked improvement in child mortality rates and increased life expectancy for kidney patients. A decrease in cancer deaths among women and children and hospitalization of patients was also achieved as a result of more effective and preventive health measures, reports the United Nations in its explanation of the reason for the award.

The awards ceremony took place at the United Nations General Assembly Hall with a reception at the Crowne Plaza Hotel in New York City.