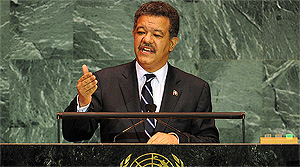 President calls for end to food as Financial Asset

The President of the Dominican Republic on Thursday railed against excessive speculation in energy and commodities markets, blaming Wall Street for social unrest in developing countries related to volatile food prices.

Regulation should, ban the use of food as a financial asset, said President Leonel Fernández, speaking to United States regulators, activists and leaders of several Latin American countries concerned about the role of speculators in recent commodity price spikes.

President Fernandez will present several resolutions to the United Nations General Assembly this week designed to push for greater international regulation of grains, oil and other basic goods.

The sharp rise in oil and agricultural prices in recent years has increased calls from governments and some market watchers to limit the size of speculative positions, halt the rise of high-speed trading and use other regulatory tactics to reduce the influence of speculators in derivatives.