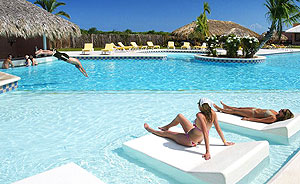 To promote the country.

In a follow-up to the successful 2011 launch of the social media-friendly website, the Dominican Republic Ministry of Tourism is introducing a multi-channel campaign featuring print, online and broadcast that generate engagement with consumers wherever they are in the world today, inspiring them to be social and share their unforgettable experience in Dominican Republic.

Building on the destination’s socially active fan base, the dynamic campaign provides a new perspective on the wide range of attractions, destinations, activities and services available to travelers. The creative approach behind the ads uses social networking as a metaphor to convey the message You don’t have to go far to be social, prompting the campaign’s tagline, Dominican Republic is Closer Than You Think.

The TV spots and ads rely on social media terms as metaphors for socializing with others about a vacation in Dominican Republic. The social interaction suggests the vacation as something worthy of a status update, both literally and in the Facebook sense. As the power of social media is undeniable, the ads blend technology and social interaction to create value, the value of sharing your experiences with others, added Toribio.

The Dominican Republic’s award-winning website and the 2012 Social Campaign were developed by BVKmeka, the Dominican Republic Ministry of Tourism’s U.S. and Hispanic marketing agency since 2004. The creative works seamlessly across computers, iPhones, iPads and other mobile devices, making it even easier to tell consumers that there is no better place to get closer and socialize in real life than in Dominican Republic.

The ads will be featured in magazines, broadcast, New York’s Times Square billboards and online. The unique, attention-getting ads have already been broadcast on MEGA, as well as during the Serie del Caribe.

Five different fruits you should eat