The country will save at least 200,000 barrels of oil each year 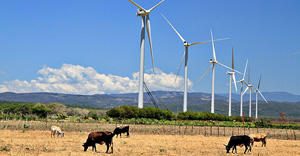 The complex Los Cocos Quilvio Cabrera, is located near the southwest towns of Juancho and Enriquillo, in Pedernales province.

The wind farm Los Cocos and Quilvio Cabrera is a milestone in this country, and has 19 windmills that are 125 meters high (over 400 feet), which is higher than the Acropolis building in Santo Domingo.

Tito Sanjurio, the general manager of Ege-Haina, said that the energy park will transform the area into a new tourist pole, besides allowing for an important savings of fuel.

We are making history in the Dominican Republic. Wind energy is now a reality. And I really feel identified with the project, since it was the first contract that I signed when I arrived and the National Energy Commission in 2009, said Enrique Ramirez.

He said that without any doubt this will be the first of many wind farms, and that the country will benefit by savings of some US $20 million less in imported oil each year.
The investment in the wind farms of Los Cocos and Quilvio Cabrera, in Juancho, was made by the Haina electricity Generating Company (Ege-Haina) and the Punta Cana-Macao Energy Consortium (CEPM).

These wind parks are a transcendental event for the country, since they mark the starting point for large investments in the sector or renewable energy.