The country is experiencing a good year in terms of tourist arrivals and is committed to consolidating its position as a destination.

The Dominican Republic is present at IMEX America presenting its offer for the events segment. We spoke with Roberto Henriquez, Vice Minister of Tourism and this is what he told us:

How was 2022 from the point of view of tourism inflow in the Dominican Republic?
It has been an excellent year for us compared to the other years and every month has been surpassed both in expectation and in number of passengers.

They are developing and investing in destinations, near Punta Cana there is a new area called Miches.

It is called Miches, these are projects that Dominicana has wanted to develop. New tourist destinations are being developed very well and we hope to bring them out quickly. There are several hotels, ports and airports that are being carried out so we will have a new tourist pole. Every month we are increasing numbers and breaking records, even our own. What is happening with the Dominican Republic is simply that it is fashionable.

Our connectivity is very good, we now have four Dominican airlines operating. We have connections with a large part of the world, the United States, South America, Central America. The airport with the highest productivity is Punta Cana. Santo Domingo and Santiago are also important and flights are full. 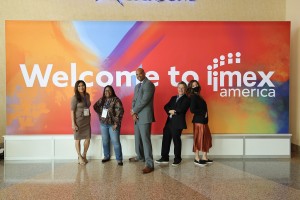 What would you say is the average length of stay in the country?

In what is the beach between seven and ten days; and in the capital three and four days, depending on the type of business. The destination of the capital is commercial, now little by little it began to vary by the colonial zone that we have and people begin to be interested, because we are the country from which the world knew America. All this history, monuments and streets are recovering and that raises domestic tourism.
By 2023, four new hotels will open in the capital. The development and stability offered by the government is being seen in this. Hotels have an average occupancy rate of 80 to 85 percent.

What are the Dominican Republic’s expectations regarding MICE?

Being here makes it clear that the Dominican Republic is investing in the MICE segment. We had a strong position before the crisis and we are betting on that. The president announced the construction of a convention center for the city of Santo Domingo and there is a Hard Rock hotel company that is also building a convention center. So we are going to have two important convention centers to bet on the MICE sector, which is a necessity for the islands of Sao Tome, but also for the interior.

Which are the important market countries?

Our minister travels every month to tourist destinations seeking to increase the production of cities, especially in the United States. The results are there, in just two years and the crisis we have had, the Dominican Republic is fully recovered. As for the countries that visit us the most are Spain, France, Italians, Russians, although it fell a little due to the global situation, and Ukraine as well. As for Latin America, Brazil, Argentina, Colombia and we have an increase of Cubans.

Is there any action plan for the future?

Undoubtedly, our planning is for five years. It is the first time in the Dominican Republic that so many statistics are kept. Every first day of the month the ministry gives the information of all the tourists that arrived, nationality, age… absolutely all the necessary information. Decisions for the coming months are made based on this information. We do not work with speculations, but with realities, and on that we invest in a controlled, focused and direct way to recover and maintain tourism.