The novel and eye-catching immersive experience of the Dominican Republic’s stand, which allows visitors to see “up close” various Dominican spaces, was relegated to the background yesterday when the Minister of Tourism, David Collado, announced that the prestigious Ritz-Carlton hotel chain will open an all-inclusive luxury hotel in the country.

All this happened during an agreement with the investment fund manager Pionneer, which announced the Yanuna hotel project in which it plans to invest US$2 billion over the next ten years.

The details of the investment were offered by the executive vice-president of Pioneer, Yamil Isaías, who spoke of the amount and the rooms to be built but not of all the brands that will be built due to a “jurisdictional issue”.

Collado, however, decided to take the plunge and made the announcement during a brief speech in which he said he appreciated the importance of the project.

Returning to Yanuna, Isaías explained that this is an ambitious project to be developed in an area of almost three million square meters located in Macao, in the Punta Cana area.

On the other hand, Isaías recalled that they are an investment fund authorized by the Superintendence of Securities and that their first investment was in 2018 in Miches: the Club Med Playa Esmeralda and later the St. Regis Cap cana Resort and Residences.

In that sense, he indicated that the purchase of the land for Yanuna was made with his funds, with the support of Afp Popular and other developer partners such as Javier Tejada, who was also present.

The first two hotels to be built will have 300 and 250 rooms and will be operated by the Marriott chain.

The first investments to be made, added Isaías, will start this year and will have a total cost of US$250 million.

When he speaks of institutional investors he is referring to pension funds and public capital investment funds. “We have all turned to the tourism industry because we see the security, long-term prospects, growth, profitability and above all that it contributes to the economic-social development of the Dominican Republic.”

Tejeda also emphasized that Yanuna is a project that is being developed from scratch, so it has an organized master plan that at the end will have more than 4,000 hotel rooms.
the inauguration of the stand.

Full of image and flavor, the Dominican stand was inaugurated with a little delay because they were waiting for King Felipe VI and Queen Letizia to greet them, which happened a few minutes after 12 noon.

After they greeted the Minister of Tourism, the formal inauguration ceremony took place, which was headed by David Collado and the presidents of the two banks that are giving the greatest support to the fair: Chistopher Paniagua, of Banco Popular Dominicano; and Samuel Pereyra, of Banco de Reservas. 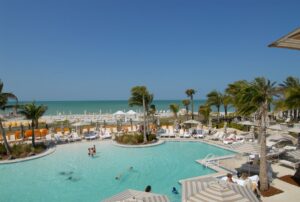 Delivering the first speech, Paniagua said that for Banco Popular Dominicano it is a pleasure to be part of the Fitur delegation, as they do every year.

“As always we have felt the enthusiasm, the energy, of the participants, and the great interest that exists to continue investing in the Dominican Republic,” said Paniagua.

After highlighting the commitment of the public and private sectors that sustain the growth of the economy, Paniagua congratulated President Luis Abinader and Minister Collado for the commitment and effort they have dedicated to the tourism sector.

Pereyra explained that within the framework of the fair, Banreservas business executives have been meeting with tourism entrepreneurs to whom they have made known the offers that the Dominican Republic has as a destination. In this sense, he recalled that in the fair will be announced important destinations such as Miches and Punta Bergatín, which is in Puerto Plata.

Afterwards, Minister Collado thanked the support of the Banco Popular and the Banco Reservas for Fitur, but also affirmed that last year was the best year in the history of the Dominican Republic in terms of tourism.

He also said, in reference to Shakira’s latest album, that one can go to the Dominican Republic with a Rolex and a Casio.

The inauguration ceremony of the stand was also headed by Manuel Alejandro Grullón, president of the Board of Directors of Banco Popular; Juan Bolívar Díaz, ambassador of the Dominican Republic in Spain; Aníbal de Castro, Dominican ambassador to the World Tourism Organization; and Gabriel Escarrer, CEO of the Meliá Group.