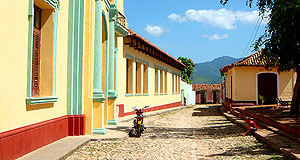 Entrepreneurs of both countries met in La Habana.

The Cuban Chamber of Commerce organized a meeting with a delegation of Dominican entrepreneurs led by Eddy Martinez Manzueta, general secretary and executive director of the Center for Export and Foreign Investment of the Dominican Republic (CEI-RD) with the purpose of expanding economic bonds in terms of investment and cooperation with Cuba.

Representatives of enterprises or institutions related with transportation, energy, education, health, culture and the iron and steel industry, among others, have stated their interest in fostering joint projects that would boost the economic development of the two countries.

Secretary of State and Executive Director of the Center for Export and Investment of the Dominican Republic Eddy Martinez expressed his interest in promoting trade, economic and cooperation ties between his country and Cuba.
Manzueta said that both economies have special characteristics which make them complementary, and in this sense, bilateral trade, once both parties can identify opportunities, will definitely increase.

Currently bilateral trade ranges between 60 and 70 million dollars a year, said Manzueta. According to Manzueta, that volume is low according to the level of trade that each of the two nations has in the world, and it can be much higher.
Manzueta said he felt hopeful about the meetings held here this week in areas such as energy, food, health and services. The ambassador of the Dominican Republic to Cuba, Luis Manuel Castillo, said his country could become the ideal bridge to show the world the Cuban scientific and technological development.

The objective of this session was to inform Dominican businessman of the performance of the Cuban economy in 2011 and prospects for 2012, on foreign trade and bilateral relations.
This first contact included a presentation of business opportunities in Cuba, by Celia Labora, the Director of International Relations of the CCC, and a meeting of representatives of the banking system of both countries.

The Dominican delegation will visit the Center for Genetic Engineering and Biotechnology, the Ministry of Agriculture and other institutions and agencies.