The Dominican ambassador to the Kingdom of Spain, Juan Bolívar Díaz Santana, highlighted the impact of the Dominican Republic’s participation in the International Tourism Fair (Fitur 2023), which begins this Wednesday, January 18 through January 22, and where the municipality of Miches will be promoted as a new tourist destination.

Díaz Santana said that the Dominican delegation participating in Fitur will have a week full of activities in which the Dominican Republic will be promoted with important initiatives such as the opening of the Banco de Reservas office in Madrid.

The ambassador described as successful the strategy put in place by the Dominican government for the recovery of the tourism industry which was severely hit by the COVID-19 pandemic.

The Dominican diplomat said that the recovery of Dominican tourism was due to the strategy implemented by President Luis Abinader and Minister David Collado through the Tourism Cabinet and the National Vaccination Plan.

Juan Bolivar Diaz Santana emphasized that taking the vaccination to the different tourist poles resulted in travel agencies promoting the country worldwide as a safe destination, thus sending a message of confidence to the world that the Dominican Republic was a safe destination for vacationing in the midst of the pandemic.

“The policy that was established to massively vaccinate the entire population including the tourist poles was disseminated to the world through hotel sales agencies and people. Look there is a safe place where covid-19 is under control, let’s go there, and because of that, tourists began to arrive in the Dominican Republic”. 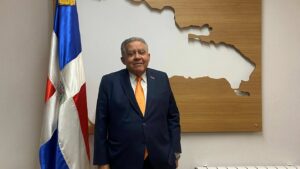 The Dominican ambassador in Spain also highlighted the recognition granted by the World Tourism Organization to the Dominican Republic as the number one country in the world in recovering this important sector for the economy.

Díaz Santana also highlighted the impact that the opening of the Banco de Reservas office in Madrid will have on the Dominican community living in Spain.

He said that the opening of the Banco de Reservas office is part of President Luis Abinader’s commitment to Dominicans abroad, which was reiterated by the president during his visit to Madrid in January of last year.

“This is part of the plan to protect and promote the Dominican community abroad as the number one foundation of the Dominican government’s foreign policy,” said the Dominican ambassador to Spain when interviewed by Moises Gonzalez of the digital newspaper Despertar Nacional.

Banco de Reservas opened a representative office in the Spanish capital as part of its internationalization strategy, which will allow the Dominican diaspora to manage banking services and financial advice related to possible investments and other business operations in their country of origin.

The general manager of Banreservas explained that “with this initiative, it becomes the first and only Dominican bank with a presence in Spain, in addition to advancing its internationalization and positioning beyond our borders”.

He added that it will also contribute to promoting the prosperity and well-being of all Dominicans living in Madrid and elsewhere in Spain. Subsequently Banreservas contemplates opening similar offices in New York, Miami and Panama.