President Luis Abinader inaugurated this Tuesday the remodeling and expansion of the La Romana Cruise Terminal, which will have the capacity to receive cruise ships of the “Oasis” and “Quantum Ultra” classes, among the largest in the world.

The port, located in the east of the country, has an investment of more than US$15 million and is part of the initiatives of the Government and the private sector to boost tourism and the economy of the region.

La Romana Cruise Terminal opened its doors to the world with the reception of Royal Caribbean’s Odyssey of the Seas with 4,695 passengers.

During the inauguration of the work, the President assured that the Government that he heads has a commitment with the generation of jobs and to promote the arrival of tourists to the country.

“The Dominican Republic is advancing along the path of social development and growth, and this can only be achieved with the dynamization of the economy, state support to sectors as important as the port and tourism, as well as the protection of investment and the unrenounceable commitment to the socioeconomic development of the Dominican people,” said President Abinader.

In this regard, the executive director of the Dominican Port Authority, Jean Luis Rodriguez, spoke of the economic benefits that this type of investment brings to the country, taking into account that each cruise ship passenger that comes ashore contributes approximately US$100 to the Dominican economy. 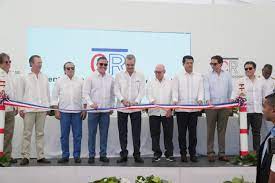 “This ship that we have here, with 4,695 cruise passengers, can mean an economic benefit of about half a million dollars for the province of La Romana in just six hours. Money that goes into the pockets of our tourist guides, artisans, cab drivers, waiters and other workers who live off the benefits of being islanders,” said Jean Luis Rodríguez.

For his part, the director of the La Romana Tourist Port, Luis Emilio Rodríguez, said that for more than 20 years “we have been leaders in the tourism and cruise industry in the country and with this transcendental investment we are not only increasing the operational capacity of our port of La Romana, but we are also providing the maritime part with the necessary conditions to be able to receive the largest cruise ships in the world”.

The new La Romana Cruise terminal increased the capacity and depth of the port to receive “Oasis” class ships. It also doubled the compression capacity, reinforced the beams of the piers with additional piles and increased their rigidity. This terminal will generate a hundred direct and indirect jobs.

The terminal will have a larger area for visitors’ recreation, as well as swimming pools, fountains, zipline, restaurants, bars, commercial and service areas.

Accompanying President Luis Abinader were the Administrative Minister, José Ignacio Paliza; the Minister of Tourism, David Collado; the executive director of the Dominican Port Authority, Jean Luis Rodríguez; the president of the Board of Directors of APORDOM, Alejandro Campos; the bishop of the Diocese of La Altagracia, Jesús Castro Marte; Pepe Franjul Jr., president of Central Romana, and other executives of Central Romana, authorities of the area and representatives of the private sector.