The President of the Republic, Luis Abinader, in his speech evaluating his first two years in office, said that the investments being made are changing the face of the country, and highlighted, among them, the Pedernales tourism project.

He said that the transformation of this pole is a source of wealth that will impact the entire southern region, saying that “it will allow us to have one of the most important tourist poles in the region in the coming years and that months ago we started the infrastructure works”.

The President also said that the construction of the port of Cabo Rojo, in the province of Pedernales, which will begin to disembark tourists in November 2023, has begun.

In this regard, President Luis Abinader also announced that the construction of the first hotel in that area of the South is already being put out to bid and that the bids for all the projects of the first phase, which total 11, will be uploaded on a monthly basis.

The head of state also announced that the designs for the construction of the International Airport of Pedernales, which will be of fundamental support to promote tourism in that region, are almost ready.

He also said that the government is advancing in the construction of the Manzanillo project, for which the largest electricity generation plant in the country has been tendered and awarded, with its fuel deposit that will provide great energy security to the northern region. In addition, the shipyard project has been awarded and the new wharf is under bidding.

“Smaller in size, but with the same impetus, work will also begin on the Bergantín project in Puerto Plata in the coming weeks, after more than a year of designs,” the president noted. 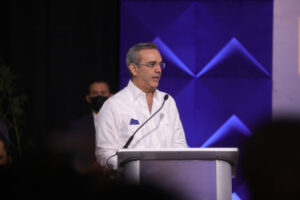 President Abinader said that these projects will be a worldwide example that we will all be able to see and will have an important impact on the lives of thousands of Dominicans.

In this regard, the President noted that all these development initiatives will definitely change the face of the entire country and will bring thousands of direct and indirect jobs, boosting local economies and providing great economic growth.

On the other hand, President Luis Abinader said that, along with these, “we have hundreds of private sector projects in tourism, free zones, industrial and real estate throughout the territory with the guarantee and confidence inspired by a government that follows them with transparency and in which the business sector trusts”, he said.

In his historic speech from the Restoration Hall of the Gran Teatro Regional del Cibao, in Santiago, President Luis Abinader said that in order to strengthen and promote our economy it is also necessary to strengthen diplomatic ties through foreign policy.

Alliance for Development in Democracy

He emphasized that, for the first time in the international arena, we are taking the initiative with bold measures, such as the creation of the Alliance for Development in Democracy, founded in September last year, jointly by Costa Rica, Panama and the Dominican Republic, with the objective of seeking development through transparent processes and respectful of human rights.

The governor said that this alliance, focused on cooperation, trade and the search for investment, has already met four times, and will meet again this September in New York to celebrate its first anniversary. Its impact has been such that, at the last summit in Los Angeles, Ecuador asked to join, while the European Union and Canada have asked to be observers in the future.

President Luis Abinader stated that, if the Dominican Republic has an international concern, it is about the situation of our neighboring country, Haiti, with whom in the year 2021 we agreed to build a border fence, which will order our trade, help us in the control of immigration, the fight against the trafficking of arms, drugs and other forms of crime.

He added that the works have already begun, and at this moment we are in the first phase of construction of the initial 54 kilometers.

“As you can see, the Dominican Republic is advancing on all fronts and is well on its way to development. You can be sure that we will achieve our objectives, with effort and overcoming difficulties”, said the President.