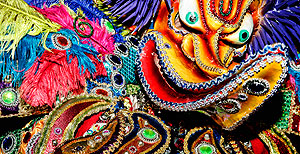 The carnival season in the Dominican Republic, kicked-off recently, as it begins in February and ends in April.

Since the beginning of the year, companies that offer tours began their preparations to move tourists and natives to regional carnivals, among which La Vega Carnival, the most colorful and expected of everyone.
Various companies, such as entertainment and travel agencies, organize Sunday tours during the month of February to La Vega, situated an hour and 30 minutes north of the capital city of Santo Domingo, because the carnival festivities in this particular town have become legendary.

The carnival season is traditionally a time of joy and excitement, where the local streets of major cities are filled with colorful processions that swing to the rhythm of carnival music.
During the month of February the cities of La Vega, Santiago, Bonao, Santo Domingo, Cabral, Montecristi and San Juan are overtaken by carnival celebrations. In March, the Punta Cana festival gets underway.

By far, one of the country’s most important carnival celebrations is held in the centrally located city of La Vega.
Carnival celebrations can be traced back easily to the sixteenth century, when the Spanish colonizers built this city. In La Vega, all celebrations are held on Sundays during the month of February.

The massive parade takes place on the city’s seaside boulevard, along the Caribbean Sea and in the old part of town.

The city of Bonao, one of the oldest on the island (named after an important chieftain), celebrates carnival on March 14. Also in March, the capital city of Santo Domingo brings together the best traditions from the regional carnivals to participate in the National Carnival Parade.