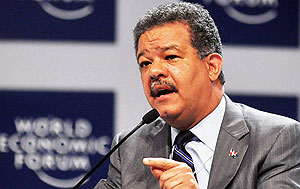 For a more efficient international financial order an end speculation.

President Leonel Fernández today urged the United Nations to become the voice of a new, fairer and more efficient international financial order and end the speculation which in his view destabilizes food prices.

During a conference in the Rome-based United Nations Food and Agriculture Organization (FAO), Fernandez also affirmed that something irregular is happening in the markets, where speculation on commodities joins the financial crisis, now based on the problems of debt and banks in the euro zone.

The truth is what’s happening is unlike anything before and has had a tremendous human impact. It has to do not only with food or energy, but part of a system that has to be reconsidered. And the United Nations has to be spokesman for a fairer and more efficient global financial order, he said.
These days we’re seeing an increase in oil prices and farm products. It has been argued that in the case of corn is the drought in central U.S., but while there’re market fundamentals, speculation acts to exacerbate their effects and the exacerbation is what’s causing a dramatic impact on food importing countries, the Dominican President said.

It’s something that is having a devastating, dramatic impact over people, which is distorting the governments, which have to intervene with con subsidies for their citizens and this generates a fiscal deficit and destabilize the macroeconomic balances of the States, Leonel Fernandez said.

Launching of the One-Stop Construction Shop