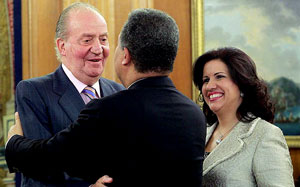 This Tuesday 3 July, the King of Spain received President Leonel Fernández who had travelled to Madrid to take his leave before his term as President ends on 16 August. Fernandez arrived at the Zarzuela palace, the royal residence, accompanied by his wife, Vice President-elect Margarita Cedeño, who was congratulated by the King for her electoral win.

During the meeting, King Juan Carlos expressed his surprise at the Dominican Republic’s macroeconomic management and success in maintaining economic stability despite the global financial crisis.
Leonel, I congratulate you for this great job that you have done over these eight years for the welfare of the Dominican Republic as well as for the Ibero-American community, he said.

Speaking to journalists in Madrid, President Fernandez said that the application of austerity policies should not conflict with policies aimed at bringing about economic growth and generating employment. He said that it was not irresponsible to understand the necessity of financial sustainability, and fiscal stability but in order for people to be prosperous and well, the economy had to grow and jobs had to be created.

He said that Spain had been a strategic partner for the Dominican Republic and its investment in the country had increased manifold over the past few years, mainly in tourism and real estate.