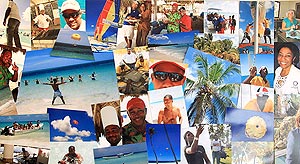 The artist and show’s creator, Ian Tink, who also goes by iTink, said he first started traveling to the Dominican Republic 11 years ago.

Since then, he married a Dominican and has traveled 30 times to the nation that occupies the eastern half of the island of Hispaniola. Haiti occupies the western half.

Tink said his work for the nation’s office of tourism gave him a good, close-up view of the people of the Dominican Republic. I’ve been to all four corners of the country and taken over 100,000 pictures there.

Many subjects of ¡Domincanos ! are family and friends, but other shots are historical and cultural, and many take place during the Carnival celebration.
According to Tink, there is a misconception that Dominicans are a faceless people without a central, cultural identity, because Dominicans are often a mix of native people and African and European descendants. Tink said it was that idea that inspired the famous blank-faced dolls that originated in the Dominican city of Moca.

In response, Tink created the « Filling In The Faces” portion of ¡Domincanos !, a vast collage of portraits of Dominicans from different walks of life.
The biggest statement I want to make is what a beautiful people Dominicans are, he said. I don’t see them as a faceless people.