The CEO of Grupo Piñero and president of Inverhotel, Encarna Piñero, highlighted the sustained growth of the tourism industry and real estate investments in the Dominican Republic, which in her opinion is due to the “continuous” policy of all Dominican governments in the 27 years that the company has been operating in the country.

During an interview with the commentators of the program Despierta con CDN, in the hours prior to the inauguration of the 43rd version of the International Tourism Fair (Fitur 2023), the business executive announced that in 2023 they will invest $100 million in the development of tourism projects, of which $70 million will be in the Dominican Republic, in addition to the Cayo Levantado Resort project, which they are developing in the bay of Samaná.

“It is a sign that we continue to believe in the future of the Dominican Republic, especially because at the government level, through the Tourism Cabinet headed by President Luis Abinader himself, together with Minister David Collado, have given us the opportunity to work together with them and to put tourism in a strategic and fundamental place for the new development policies”, he said.

He also said that this, in turn, generates confidence and security so that investors can meet their objectives in the country, while noting that they have a clear, fluid and transparent line of conversation with the authorities of the Government presided by Luis Abinader.

That is why Piñero attributes the “exponential growth” of Dominican Republic Tourism to the efforts made by governments so that it remains one of the main sectors of the economy that have developed the country. 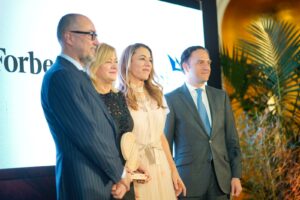 “From Spain to the Dominican Republic, we are seeing growth that has been seen since the first quarter of 2022. And the projections we have for this year are quite good. I can’t say figures because we are just at the beginning, but maybe in five days after Fitur, which is where you really see the trend, we could surely be more concrete with the projections. We are very happy to see this moment of tourism”, he commented.

He said that with the effort of government authorities, investors and all the actors of the sector, the recovery of Tourism has been consolidated, after the harmful effects produced by the coronavirus pandemic at national and international level.

She stated that as president of Inverhotel, she continues to trust in the Dominican Republic thanks to the spirit of tranquility that prevails in the country. She also pointed out that the policy of continuity of all Dominican governments has allowed Tourism to present a constant exponential growth and progress.

“It has been a priority in the different governments. This has given continuity so that Tourism continues to be one of the main engines for the development of the country”, he said. He gives as an example the tourist development of Rio San Juan, Puerto Plata, Punta Cana, Samaná, which, he said, were made with the participation of governments that have seen it as a source of development.

In the words of the company’s CEO, “we needed a concept that would capture and help discover what the Dominican Republic was on an island. That’s why we created the hidden rhythm concept. You can find the Dominican Republic on a small island, through three pillars we have developed: culture, which includes gastronomy and music; through an area we have created where you can find yourself in a spiritual way; and then there is the environmental part, through innovation, which is how you meet nature inside the hotel.

He explained that this is contemplated in the tourism project they are developing called Cayo Levantado Resort, whose main objective is to become one of the main destinations in the Region, not only for the experience itself of being on an island, but rather for the sustainability of a vacation species at the management level.