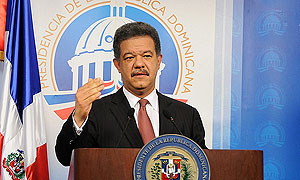 To Spain, Italy, France and Belgium.

President Leonel Fernandez left for Madrid on Sunday, arriving in time to congratulate Spain for its European football cup victory.

His 10-day European tour takes him to Spain, Italy, France and Belgium. He is being accompanied by a large delegation.

The Presidency revealed some of those on the official delegation include First Lady Margarita Cedeno, Minister of Public Works Victor Diaz Rua and Secretary of the Presidency Rafael Nunez.

Domingo Jimenez, in charge of the European Development Fund; Marcos Villaman, executive director of the National Council for State Reform; Omar Liriano, director of the Center for Government Information, and Major General Hector Medina, chief of the military aides are also part of the delegation.