According to Haitian president Michel Martelly 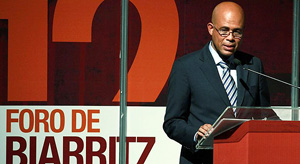 Haiti President Michel Martelly affirmed Friday that relations between his country and Dominican Republic are at their best moment.

Speaking during the closing ceremony of the 12th Forum of Biarritz held in the Hotel Jaragua, the Haitian leader said despite room for improvement, relations between the two countries that share the second biggest Caribbean island are good.

He also hailed the Forum as important for bolstering Latin America-Europe ties.

Martelly, who arrived in the country Friday afternoon, listed some the measures taken in the effort to recover his country from the January 2010 earthquake’s catastrophic damages, and place its economy in a capacity to compete.