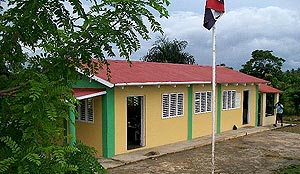 According to the Dominican Ministry of Education.

The educational structures that the Ministry of Education is building are built to resist earthquakes, according to a deputy minister who is in charge of School Buildings. He said that the schools that are not up to the norms are undergoing the necessary modifications in order to reinforce their structures and make them more resistant to the quakes.

William Sifres reported that in the present situation they are carrying out a program of repairs and strengthening of the school buildings with a time limit on the construction and that there are more 100 in this process at different points around the country.

He explained that the process consists in eliminate the vulnerable points such as those areas with short columns with open-spaced concrete blocks, in which case these are substituted by a reinforced solid wall or with windows.

Likewise, , the authorities, with the support of the General Directorate of Territorial Development and Organization, the Ministry of Economy, Planning and Development, and the Inter American Development Bank (IADB), are working on the preparation of a guide that will motivate 100% of the schools to work out their plan of risk management and each year test it out at the beginning of the school year.