With the objective of promoting the development of the Haina-Nigua Industrial District, the Ministry of Industry, Commerce and Mipymes (MICM), the Center for Industrial Development and Competitiveness (PROINDUSTRIA), the National Competitiveness Council (CNC), the Association of Industries and Companies of Haina and the Southern Region (AIEHAINA) and the Association of Industries of the Dominican Republic (AIRD), signed an agreement to carry out joint work, strategies, projects and initiatives.

The signing ceremony was attended by the Minister of the MICM, Víctor -Ito- Bisonó; Napoleón Rodríguez, president of the Association of Industries and Companies of Haina and the Southern Region (AIEHAINA); Ulises Rodríguez, general director of the Center for Industrial Development and Competitiveness (Proindustria); and Peter Prazmowski, executive director of the National Competitiveness Council (CNC).

According to the agreement, one of the first steps will be to prepare a diagnostic study of the opportunities, challenges and contributions of the industrial district and the Institutional Strategic Plan of the Haina-Nigua Industrial District 2023-2027, both through a consultant or consulting firm, to promote innovation and productivity in the area. 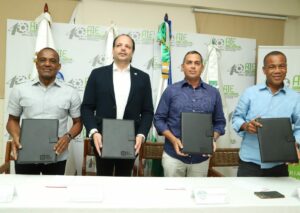 During the ceremony, held at the MICM headquarters, Minister Bisonó assured that “from the public sector we remain committed to promoting national investment, the Industrial Districts and the promotion of productive linkages, to continue generating favorable conditions that raise the levels of productivity, innovation, quality and sustainability of all our industries”.

Napoleón Rodríguez, president of AIEHAINA, thanked the support given by the ministry and emphasized that the association pursues with the agreement “to implement all the benefits contemplated in the Law.”

Ulises Rodríguez, of Proindustria, valued the signing of the collaboration agreement, which he described as “necessary” because it will help AIEHAINA to take advantage of all the benefits of industrial classification and will strengthen productive linkages.

The Haina – Nigua district was certified as the first Industrial District of the country, which is a milestone in terms of industrial development in the Dominican Republic.

The ceremony was attended by the Vice Minister of Industrial Development of the MICM, Fantino Polanco, as well as members of AIEHAINA.

Advantages of the Industrial Districts

The support and promotion by the State of the creation and development of Industrial Districts is in itself a powerful and effective industrial policy instrument in the countries that have implemented it, which will make it possible to achieve higher levels of efficiency and skill in production through specialization, foster the development of production chains and the exchange of finished products and raw materials.

The designation grants to the industries installed in the Haina Industrial Zone the benefits established in Law 392-07 for Industrial Parks, among them to be classified as unregulated users of electric energy and valued as large consumers of fuel, for which they will be able to acquire it directly in the import terminals.

The Haina Industrial District has an estimated 1,291 companies, where 78.5% are service companies, 20.4% are industrial and 1.1% are from the agricultural sector.