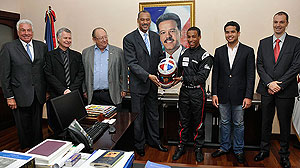 Benjamin Breny can count on the Government support.

Payano showed his interest for the life of Breny, who said he was abandoned by his parents as he was only four months old, 21 years ago.
At just 21 years, this young man from the Dominican Republic, which was adopted at 4 months of age by a Belgian couple, works to realize his biggest dream: Reach Formula 1, and put up the Dominican flag in an industry that generates billions of euros annually.

After the meeting, Felipe Payano gave a press conference in the Hall James Rodriguez of the Sports Ministry, during which he highlighted the personal and professional qualities of this young man, who certainly has the talent to reach F1.
Although he grew up in Belgium, Benjamin has always felt Dominican this is why he has the Dominican flag on his uniforms and helmet. We appreciate the courage and determination of this young man who was born with a purpose and has gone so far that the main leaders of this world sport, as Bernie Ecclestone, have shown their interest for the arrival of Benjamin to the elite of this sport, which implies a great opportunity of international visibility for the Dominican Republic, said Payano.

Benjamin Breny currently competes in F3 in different European circuits and his next challenge will take place from 27 to 29 April in Portimao, Portugal, continuing throughout the 2012 with races in Germany, Belgium, Britain, France, Hungary, Italy and Spain.
His manager, Henri Luzet said that Benjamin fills a geographical and cultural void that currently exists in future F1 champions from the Caribbean. For this reason we are working with a highly qualified and recognized team as his driving coach Roberto Moreno, a famous Brazilian racing driver and Philippe Gauthreron, who is our technical director. So far, he’s only one who has trained four F1 drivers in 3 consecutive years, such as Vitaly Petrov, Sergio Perez, Charles Pic and Van der Garde, a Caterham reserve pilot.

During the meeting, Luzet also reported that Breny’s car uses an Toyota engine and that Mercedes Benz home offered make a test on it, which has a value of $ 100,000, at no cost. This shows the talent of the Dominican pilot is recognized by many.
Henri Luzet has been working in motor sports for 23 years. He was successively manager recognized drivers as Thomas Accary, Lucas Foresti, Busaid Adriano, Jasmine Jafaar, Mario Dominguez, Thomas Biagi, among others.

Breny Benjamin for his part said that in addition to his passion for race, he wanted to start an education campaign aimed at the population, to encourage people to drive responsibly and safely.
I want to give a message to young people: the speed is to be enjoyed on a circuit not on the roads. Speed​​is happiness and light, not the drama of road accidents that affects families.

The unique talent of Benjamin Breny was discovered by the legendary intuition of Olivier Vanoni.

At the age of 13 he began racing in karts and kept working to reach Formula 3 today.

He has participated in:

Participation at the final of the Swiss Championship of BMW Formula