Punta Cana, Samaná and Puerto Plata and the North Coast, have not been affected by the passage of Hurricane Maria 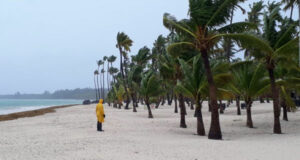 The information was provided by the Association of Hotels and Tourism of the Dominican Republic (Asonahores) in a press release saying that the main tourist facilities in Punta Cana, Samaná and Puerto Plata and the North Coast have not been affected by the passage Hurricane Maria near the Dominican coast; and its main effect has been the damage to gardens and broken trees.

He informed that all the tourists, more than 50,000, staying in hotels (mainly in Punta Cana) spent the night of Wednesday and today (yesterday) in safe conditions, and those who were taken to other hotels to comply with the protocols of storm safety, are now returning to their establishments.

Asonahores explained that the tourist regions of the Caribbean coast, Bayahíbe, La Romana, Juan Dolio, Boca Chica and the South operated normally during the emergency; also Santo Domingo, Santiago and the tourist communities of the central mountainous region (Jarabacoa and Constanza).

Maria crossed near the east coast and north of the country between the afternoon of Wednesday and Thursday causing strong rains and winds.