The Dominican Republic received more than eight million tourists, which represents for the island “15% of the Gross Domestic Product”.

Despite the absence of active armed conflicts in Latin America, the region is one of the most dangerous in the world with high rates of murders and kidnappings, something that prevents the normal development of the life of Latin Americans and generates distrust in many tourists.

To break this trend, many countries in the region have developed specialized police forces, which are located in tourist spots such as beaches, old towns, museums or archaeological ruins, and those that do not have them set up special operations for visitors.

This is the case of Uruguay, which according to its Minister of Tourism, Tabaré Viera, explained to EFE during the International Tourism Fair of Madrid (FITUR) held this week in Madrid, has operations for the reception of cruise ships: “up to four ships arrive per day, many thousands of tourists come down together, there are special operations where they disembark and pass through”.

He recalls that his country “in relative terms, offers public safety” although “it does not mean that there is no need to be careful like everybody else”.

In 2022, the Dominican Republic received more than eight million tourists, which represents for the island “15% of the Gross Domestic Product”, and leaves in the public coffers “8,500 million dollars” annually, according to the Dominican minister of the branch, David Collado, told EFE.

To protect this precious asset, they have a tourist police force with 1,800 agents and they are “reforming and strengthening it”, the minister explained and explained that in 2023 his country will ally “with tourist police in more developed countries” so that Dominican agents “take training courses”.

In addition, they are renovating the beaches “putting internet and lighting” so that tourists “feel confident and Dominicans can enjoy themselves”. “We have taken very seriously to be a safe destination,” he concludes.

Paraguay’s Minister of Tourism, Sofía Montiel, told EFE that her country has a special security corps aimed at tourists, made up of 340 agents throughout the country. 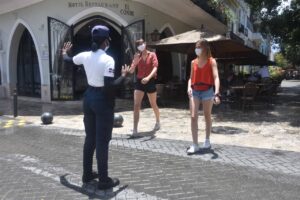 Paraguay had in 2022 “a rebound in international visitor arrivals of more than one and a half million, as well as more than 500 million dollars in foreign exchange income”, according to the minister, and although security is good, “we are working together with the Ministry of the Interior, the police and the tourism security division, which is the one that works providing facilitation and guidance to visitors”, she explained.

For its part, Ecuador, the guest country for the next edition of FITUR, has 300 agents to protect visitors, and according to its Minister of Tourism, Niels Olsen, who told EFE that although the country has “social problems like all Latin American countries, no incidents outside of the usual numbers have been reported”.

“There have been cases of insecurity but outside the common tourist route”, and “so that it is not the Ecuadorian government talking about its own security” he alludes to “travel alerts” that the U.S. makes to inform its citizens traveling abroad about security, which go from one (maximum security) to four (lower grade), and Ecuador is now at two, “when many Latin American countries are at three and Spain, at two”, says Olsen.

Security in Mexico, different according to the State

The case of Mexico is one of the most striking in the region because of the high rates of violence in the country, after decades of fighting drug trafficking.

The Secretary of Tourism of the State of Yucatan, Michelle Fridman, is clear that “Yucatan is the safest destination in Mexico and one of the safest in the world” and explains that Merida (the capital of the State) “is the second safest city in the American continent”, “we are safer than any city in the United States”, she concludes.

Mexico is so big as a country that each state could be the size of a European country”, he affirms.

Along the same lines, the Undersecretary of Tourism Services of Guerrero, Iván Ruiz, assures that in his state “there have been no problems in tourist areas”. He recognizes that “there have been some events” recently, but that these “happen in the north” of the country and Guerrero is in the south.

The Secretary of Tourism of Nayarit, Juan Enrique Suárez, emphasizes that his state “is the first in security perception” and “the second safest in Mexico” behind Yucatán.

“We have surveillance cameras with trained tourist police where we have to go without anything happening,” he explains.